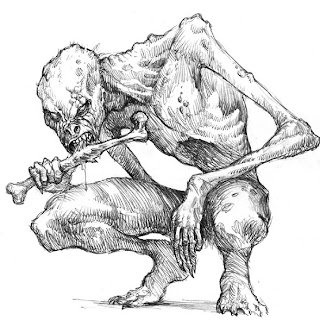 Session Prep really is turning into a four letter word, but I'll get back to that.

Last night marked the return of one of our group's original players to the group, which puts the current number of PCs at five.  It also adds a cleric to the mix, which is the first healing that they'll have that doesn't come from potions or rest.

There was a crapload of in between session stuff -  the usual mix of spell acquisition for the casters, equipment shopping for the fighter and thievish folks and gladiator games for the gladiator in the party.  Well, not FOR him.  He just spent all of his loot arranging for, putting the purses up and throwing the general party in the surrounding town area for the gladiatorial games.  A fun time was had by all.

As I've mentioned in the past, I'n running my current ACKS campaign as a sandbox style, or sandboxie, game. I'm not so sure it's the purest sandbox out there, but it works well for it's purposes so far.

One of my players hit me with a ton of inquisitive emails prior to the game session. Thankfully, one of players had some thoughts on where he felt the party should be heading to during the night's game play.  Literally minutes before the game (as I was out most of the day) I reread some adventure info the party was likely to stumble upon while making the trek.

I use a combination of adventure sources for my sandbox.  I have some megadungeons planted, some smaller ruins of my own design, and handful of story hooks and dungeons from one sheets and the like.  I've been a big fan of adventure seeds and such since my early days of DMing, when i ran a sandbox styled campaign without even knowing that was the label.

So, forewarned with a probable route and destination for the party, I pulled out my notes and refreshed myself.  The Gnomes from Christian's 000 Hex Series made an appearance, as did one of the NPCs.  I had already planned on using a One-Sheet in the area where they planned to cross a large river - I just didn't expect it to be yet.  No matter, they are doing well, especially as they have the extra body in the party now.  They've already fought and defeated a handful of ghouls, including one that was "cut" in half by a coffin lid that the party's warrior was intending to use to pin her to the side of the coffin (natural 20 with 18 strength.  ouch!)  eat, I think it's playing out well so far.

The problem is the prep.  Prepping for a sandbox isn't like prepping for the next installment in a 12 adventure chain.  It's more like having the chain's links scattered across a board and watching your players randomly assemble it.  Knowing and preparing for everything they could possibly do is an enormous, and probably futile, task.  Conversely, not being prepared enough can lead to silence at the gaming table as you try to recall, remember, create or stammer your way through the next encounter.

I'm very thankful I'm pretty good at improvising in general.  That being said, my party is definitely keeping me on my toes ;)
Posted by Tenkar at 10:20 AM