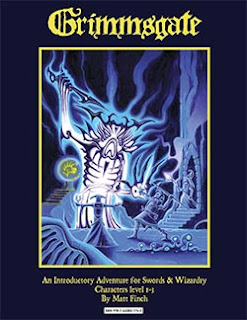 I had hoped that the stars would align and I'd be able to bring the gang back for Saturday Night Roll20 OSR Gaming (as well and rebooting the infamous Once a Month of Friday's B-Team) before the year was out, but that simply is not going to happen.

Tentatively, we'll be looking to kick things off January 7th with a new Swords & Wizardry Light campaign, but the questions becomes:

2 - do we go episodic, converting a bunch of DCC RPG adventures, with some prep and some on the fly conversions

I'm thinking the more or less weekly game would fit the sandbox and the monthly game would be better suited for the episodic play, but I've been wrong before.

I'll send out feelers to my regulars right before Christmas to get some feedback - assuming this week cooperates. The next few days are going to be hectic, so lets see what shakes out.

The urge to DM again is strong in this one, yes it is...