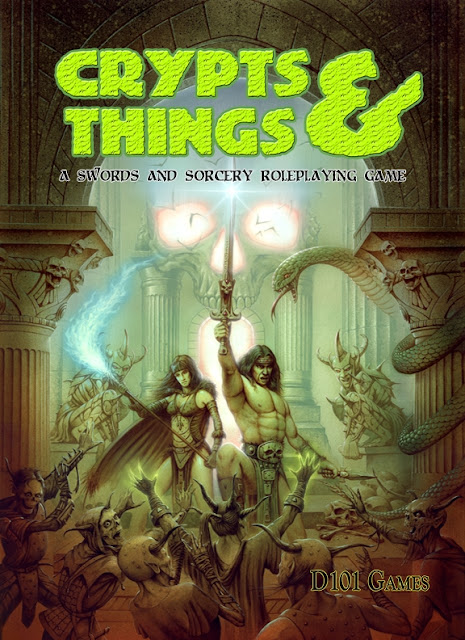 +Newt Newport / D101 Games is offering an amazing set of gifts for OSR Christmas. Three fine gift receivers, three fine gifts. One person will receive Crypts & Things Remastered in Hard Cover Print shipped anywhere in the world. Two others will receive Crypts & Things Remastered in PDF. Can I get a Huzzah!?!
The hardcover is a $40 value and the PDFs retail for $13.


The Book of Doom
-This is the referee's section of the book.
-Secrets of the Continent of Terror: A deeper view of the setting for referee's, with -The Greater Others and their Works: Three of the terrifying Greater Others and their followers detailed for use in play.
-Snake Dance: A closer look at the society of the insidious Serpent Men.
-Scourges of the Dying World: Five evil nemeses to thwart and oppose the player characters.
-Ill Gotten Gains of Dark Desire: Treasure and perilous magic items.
-A Compendium of Fiends: Dark and deadly monsters to populate your adventures with.
-The Halls of Nizar-Thun: An introductory underground adventure.
-The Haunted Lands: An introductory wilderness adventure.
-Port Black Mire: A fearsome city detailed for urban adventures.
-Notes from the Abyss: A compilation of articles and resources to aid the referee.

So, who are the receivers of these very generous gifts?

The Hardcover Copy of Crypts & Things, shipping anywhere in the word goes to:
Scott Jenks

Email me at tenkarsDOTtavern at that gmail thing and Newt and I will work out the details. Its the holiday weekend, so please forgive what I expect to be some lag.
Posted by Tenkar at 12:21 AM