Cubicle 7 to Publish Far West - The Far West Will Live! 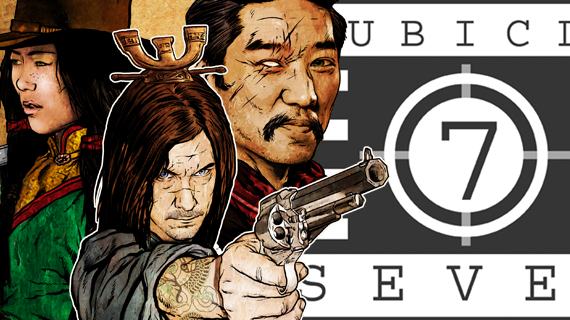 It looks like Far West will be hitting a GenCon 2013 release. I thought this Kickstarter had a real chance to just wither on the vine and die.

I am surprised that Cubicle 7 has gotten involved in the process but it's good for those that ponied up on this cursed project. Losing their lead artist, multiple bouts of multiple illnesses and just about anything else you can think of. I think you could make a good table of random excuses from the last 18 months of updates.

The shame is that Gareth wasn't able to finish this off with his own company. Maybe focusing on the project and not the company will all him to be more productive.


CUBICLE SEVEN HEADS INTO THE FAR WEST
MAY 8th, 2013
Oxford, UK - Cubicle 7 Entertainment, Ltd., creators of high quality roleplaying and card games such as The Doctor Who Card Game, The One Ring, Doctor Who: Adventures in Time and Space, Primeval, The Laundry, Victoriana and Cthulhu Britannica, have entered into an agreement with Adamant Entertainment to be the exclusive publisher of tabletop games released as part of Adamant's FAR WEST transmedia project.

FAR WEST is a Wuxia-Western Mash-up - a fictional setting that combines elements of Spaghetti Westerns, Chinese Wuxia, and Steampunk, and is explored via multiple media: Fiction, games, art, music, webseries, and more. A fantasy world that's The Gunslinger meets Storm Riders meets Deadwood meets Afro Samurai meets The Wild Wild West meets Crouching Tiger, Hidden Dragon meets Django meets Brisco County meets House of Flying Daggers and more. A fantasy world that is constantly shaped by its own fan community, The Far West Society - whose membership collaborate with the developers on the canon of the setting.

Cubicle 7 will be publishing and distributing tabletop games set in the FAR WEST universe, beginning with the FAR WEST Adventure Game, the long-awaited RPG. Adamant Entertainment will continue to produce all other FAR WEST releases, and FAR WEST Creator Gareth-Michael Skarka will act as the Line Developer for the releases at Cubicle 7, orchestrating the interconnectivity between all of the different explorations of this unique setting.

"Cubicle 7 really understand what we're doing with FAR WEST," said Skarka, "and they bring to the table such a dedication to quality and an enthusiasm for creation that I cannot think of a better match for us."

"FAR WEST is such an exciting project to be involved with", added Dominic McDowall, CEO of Cubicle 7. "I love the genuine involvement that The Far West Society has in shaping the setting, and it's always fun collaborating with Gareth - one of the pioneers of the digital format in roleplaying games. Our first priority will be helping Adamant get the RPG into the hands of the Kickstarter backers, closely followed by work on additional material for the game."

The FAR WEST Adventure Game core rulebook will be released this Summer, first to backers of the 2011 FAR WEST Kickstarter, and then to distribution world-wide. Additional releases in the FAR WEST game line will be announced soon.

For more information on FAR WEST, including other currently-available products, visit the official website at http://intothefarwest.com.

For more information on Cubicle 7 and its game lines, visit http://www.cubicle7.co.uk.