Playing "The Domains at War" - Subtitled: How to Fuck Up a Playtest 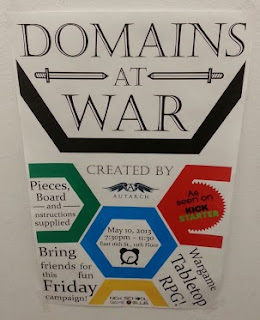 Last night I participated in a playtest of Autarch's Domains at War. It shows much promise but we did our very best to prevent any actual testing of the rules in question.

Let me explain. We were divided into two groups or armies. Each group of 3 to 4 players sat on opposite sides of a nice size conference room. The set up rocked. Each side had it's own map and it's own referee. Yep, we were playing a multiplayer double blind wargame. I was having flashbacks to my own college days.

The goal was to get to Dwimmermount while securing your supply lines and gaining allies while preventing our opponents from doing the same. We went with light and fast troops and no siege engines to slow us down. We quickly made an ally of Muttontown or Nutterburg or whatever it is right outside of Dwimmermount. All the while using our skills and spells to spy out our enemy.

When we found them, they were seeking allies in a fortress full of undead. The thing is, at that point we had found Dwimmermount and proceeded to loot the first level before encountering some difficulties in the second level. Never did see the rats with their stacks of coppers damn it! 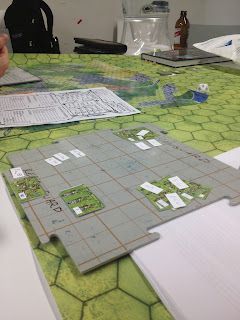 The funny thing is, both sides were working off an overall strategy of securing one's positions and the two armies never did engage, which is a shame. We almost attacked our enemy in the last turn played, but they were secure behind their fortress walls and undead allies. So, we never actually tested the combat rules, but we did get to try out the double blind system, which I suspect will work much better in cons and less so at the kitchen table, but your mileage may vary and the rules are still under revision.

I had a blast, even without getting into mass combat. I explored part of the second level of Dwimmermount and lost a level to a wight. Yes, Virginia, there are wights in Dwimmermount. Be afraid. Be very afraid.

I'm happy I'm a backer of this kickstarter, but I'll be using the mass combat rules on a smaller scale I suspect, and the double blind won't be needed as it will be the PCs against the world ;)