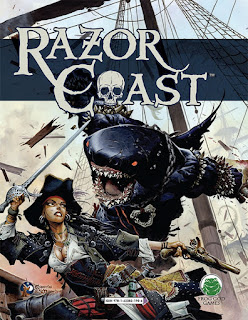 Did I mention that I find myself getting totally immersed in the Razor Coast setting material? I've moved from the Freebooter's Guide to the Introduction to the Razor Coast  in the main RC book. The backstories of the NPCs are incredibly in depth. They have real motivations that have definitely roots in their backstories. Razor Coast is full of roleplay possibilities and I've barely scratched the surface. Yep, just 30 pages into the 426 page book.

Now, I have a question. It's mostly aimed at you, my dear readers. There is a member of a broken adventuring party that is a Half-Orc Shaman of no small ability. So, it's his class, but it's not given a level, but based upon the spells he has memorized, he can advance fairly far in the profession.

Would we like a Shaman class for Swords & Wizardry? (of course, if there already is one floating around, the point may be moot - or not, as variation is the spice of life)

I have 21 days left in my personal Month of May Swords & Wizardry Posting a Day and it might be a fun thing to pull together.

Map out the first 10 levels maybe.

So, what say you? Thumbs up or thumbs down? Any other thoughts / ideas?