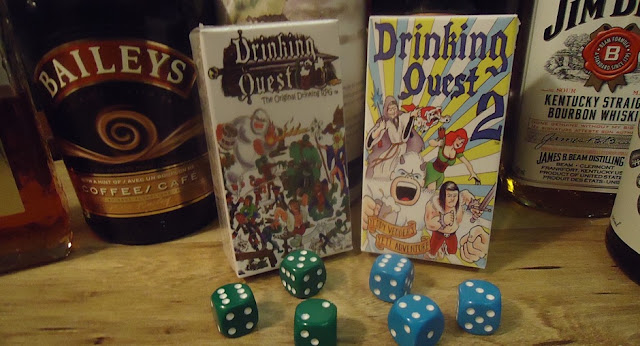 Truth is posting - we just finished a 3 hr session of Drinking Quest with +DrinkingQuest DrinkingRPG  (jason anarchy) , +Mark Hassman and +Michael Garcia . I only had to chug twice, but was also liberally partaking in some Newcastle Ale from the tap. This review is true, only my sobriety is in doubt.

Drinking Quest is a card based game which uses d6s to resolve challenges. As your character can be improved by buying or finding new loot, it is also a roleplaying game of sorts. I found that the longer we drank played, the more we actually roleplayed out characters.

Now, I'd love to talk about CENSORED and CENSORED, but I was sworn to secrecy. Suffice to say, if there are any new announcements forthcoming I've asked to be kept in the loop.

Shit, it's not easy staying focused after working your way through nearly 5 liters of beer.

Uhm... fun. The game is a fucking blast to play. I suspect it would be fun to play chugging Gatorade or the like, but the idea of playing a drinking game with fantasy roleplaying elements to it is just awesome. I would have played some of the second game, Drinking Quest 2, but my poor wife would have had to roll my desk chair to the bed if that were the case.

The art is perfect for the game, with just enough humor in it to remind you not to take anything too seriously. Not that the cards take anything too seriously, one is even written as a haiku (I'll leave it for you to figure out which one, but the first to answer correctly on this post will get a $5 RPGNow account credit from me - players in tonight's session are NOT allowed to enter ;)

We are already working on scheduling a Hangout session for DQ2. Heck, after I get the games I still need to run completed (LL and B&T) I could probably run a session or two of Drinking Quest online. It works better if everyone has access to a deck when played remotely, just so everyone can see the card in question (you have one person pull from the "official" deck) but it is far from necessary. Not sure how well I could run a session if I were partaking.

Oh shit! Did I mention I earned the most expo and won the game? Heck, my wife want to play a sesson with me. Maybe Sunday - I can't afford to be intox tomorrow night - I have to DM ;)