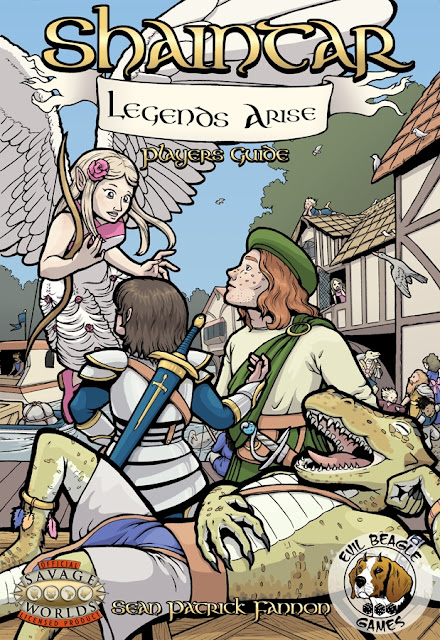 Sure, you can get these "Christmas Freebies" for free any day of the year, but don't you just like gifts more around the holidays?

Sean Patrick Fannon’s vision of Epic High Fantasy comes to life for Savage Worlds in this all new iteration brought to you by Evil Beagle Games.

"The heart of any lasting and memorable roleplaying campaign is the setting. Is it vivid? Alluring? Full of mysteries, as well as straight-ahead challenges?

If the answer is “Yes” to all of these, you are in good hands.

Just paging through the Players Guide makes you want to play, and it’s genuinely hard to create a boring character using this book; everything works together to make your Hero interesting. And that’s even before you get to the four detailed Major Enemies lurking in Shaintar. Or the rules for alchemy, or the tantalizing glimpses we get of the Black Lantern and Grayson’s Grey Rangers . . .

A winner. Get this book." -- Ed Greenwood, creator of The Forgotten Realms®

This is, essentially, a simple relaunch of the Shaintar: Player's Guide Beta that was first released by Reality Blurs in August of 2012. We've put a new cover on it, done by the exceptionally talented Susan Knowles.

Really, that's about it. No new edits, no change to the content. The main reason this has been done is to reflect that Reality Blurs is no longer the publisher for Shaintar; that is the domain now of my own publishing effort. Evil Beagle Games. Sean Preston and the RB crew are incredible folks, and they went all out on my behalf for quite a while. I will always be grateful to them for their efforts. They have some serious hits on their hands right now, not the least of which is the fantastic tremulus that is taking the game world by storm ever since their amazing Kickstarter.

With the advent of that wonderful surprise, as well as my finally deciding to strike out on my own as a publisher, we very amicably decided it was time for me to bring Shaintar back under my direct control.

So here is the first step in that process. Relaunching this Player's Guide under the Evil Beagle Games banner. There is much, much more to come, however; by now, you've likely heard or read announcements about Evil Beagle's partnership with Savage Mojo for production; the impending release of the full Shaintar: Legends Arise book; the planned Kickstarted for Shaintar: Legends Unleashed and a slew of other products for the entire line; and so very much more.

For now, enjoy this with our compliments – free, of course – and stay tuned for more.

Thanks to all of you for your continued support! Your Epic High Fantasy journey is about to take you places you've always dreamed of and never expected.