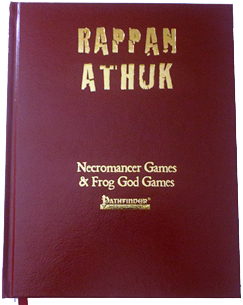 Tonight the party will move on to Rappan Athuk, after spending two sessions dealing with the Rat King. Sure, they defeated the bugger - but what's with all that icky fluid and glass coffin like chambers?  How were party members tortured, perhaps killed and healed? Yeah, moving on might be the wisest choice.

I'm not sure which entrance the party will choose, let alone learn about. We'll play that out tonight, when they get to their new "Base of Operations".

The players are psyched, and that's always a good thing ;)
Posted by Tenkar at 4:25 PM