A Kickstarter About Superheroes in the Middle Age - Exemplar: Tales of the New Roman Empire RPG

First, a confession. If memory serves, I was asked to look this Exemplar back when it launched and to give feedback, and in truth, I had nothing. I don't play Savage Worlds, and this is a Savage Worlds setting. I also don't play Supers. It is seriously not my bag, which is surprising considering how much I enjoy the comics and the movies of the same. I guess the idea of being Green Lanter or the like left me in my teens.

So, like I said, I gave it a quick peek and then never looked back. Now I'm taking a second peek at it with 8 days left in the funding cycle and I feel bad. It's not even at 10% of it's 18k goal. I don't think I, or anyone else that was asked to look it over in the beginning could have changed that much, but it's sad to see something that the creative team is obviously excited about fail to gather similar excitement from the gaming populace. Savage Worlds is a popular system with a loyal following and Exemplar failed to tap into that following. I have no idea why with the possible exception of the obscure combination of super powers and the Middle Ages.

I'd love to drag some quotes from the Kickstarter page, but most of their text is actually part of uploaded graphics, which makes it difficult. Ah well, I'll snag what I can:


Exemplar is a Savage Worlds Setting where you play Super Powered heroes bound by oaths of fealty during the Middle Ages. 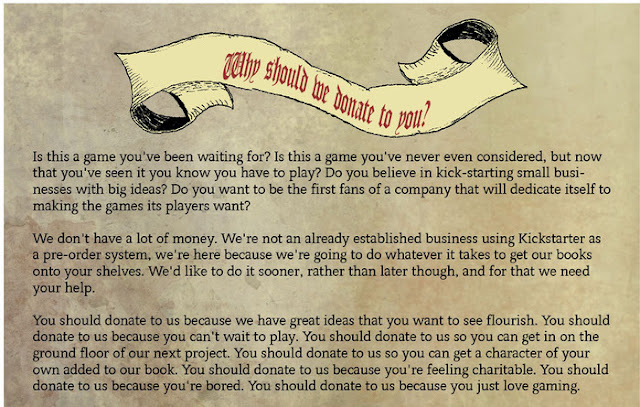