Post 2K - What's Gone on Before and Where Are We Going 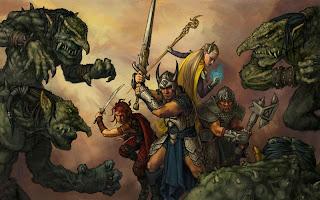 When I started this blog back in May of 2009, I really didn't know what I wanted to do with it or where I wanted it to go. I was, for lack of a better term, blogging without focus. I'd liked to think that after 2,000 posts, I've gotten somewhat of a focus.

If you've been reading this blog for any amount of time, you know I love OSR type games. It's my gaming weakness if you will. I run a weekly Adventurer Conqueror King or Die! campaign on Saturday nights via G+ Hangouts and the TableTop Forge App and monthly 2-3 session Arcs of the Dungeon Crawl Classics RPG. No longer do I just talk the talk, I now walk the walk.

Still, this blog is the vehicle that got me back to my gaming roots while at the same time opening my eyes to the other RPGs that are out there - I do like peeking at the independent games.  Heck, I even played in an Apocalypse World (worst written great game out there) game session with some gaming personalities that were almost intimidating to game with. Alright, to be honest, they were intimidating.

Sometimes I feel like I'm out of my league. That I don't belong among the other tenured and much better written and certainly more worthwhile to folks' actual gaming experience type blogs. It's the same feeling I get before every game session that I'm GM'ing. There's that bit of self doubt. I've decided to let that bit of self doubt keep me honest. It's the piece of encouragement that will ensure that I don't put in half assed work on this blog. Not guaranteeing the results won't be half assed, but at least the effort won't be ;)

Where's the Tavern going in the future?

Well, I'm pretty much enamored with the DCC RPG at the moment. It has an excellent Old School Feel rule system and a really generous community of Third Party Publishers. So yes, that will be a good part of my focus.

ACKS is my campaign game of choice at the moment, so it too will get some attention.

I'll be kicking the tires of D&D Next whenever it is required. I do want it to be a success. I don't expect it will be the success that WotC needs to satisfy the Gods of Hasbro (Lawful Evil I suspect).

Indie games that draw my attention will obviously get... attention.

I had started a series of articles that were going to compare the initial RPGs that were released in the Golden Age of the hobby. I need to get back to that.

Well, that and a barrel full of monkeys (shit! I need to use that in my Magical Toys project I'm working on). Sometimes the blog writes itself, and when it does, who am I to force it to change direction?

If nothing else, I expect fun times ahead :)
Posted by Tenkar at 9:58 PM