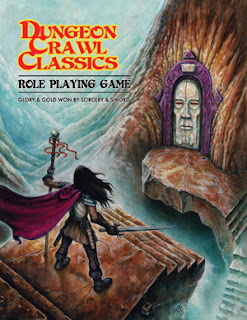 I'm really happy the way last month's Dungeon Crawl Classics Adventure Giveaway went. From an extra PDF copy of DCC 67, to two of the independent publishers of DCC adventures giving away some free swag, all the way through to 27 entries that give GMs of just about any fantasy game well rounded and detailed NPCs, everyone was a winner. (not to mention the Toys For the Sandbox

As it stands, I'll have two print copies of Brave Halfling's first seven (1, 1a, 2-6) Appendix N to give away as I get them. I'm hopeful I can get some occasional comp PDF copies from the other 3rd party publishers to fill in the monthly gaps (or just add to the prize pool to make it even more awesome).

Of course, this leads to the need to think up monthly contests that not only link into the DCC RPG but also give something back to the DCC community by the nature of the entries themselves (much like the detailed Zero Level PCs that were the entries in last month's contest. Oh, and it can't be overly difficult, as it would not be overly fun ;)

I figure the next contest will require one to create a Patron - Name, Title and a sentence or two describing him / her / shim / it / whatnot. No tables or spells. Just the kernel.

That should cover July (which will get posted when I get the loot to give away).

August may simply ask for an Adventure Title and a sentence or two description.

Like I said, entries that give back to the DCC community.

After that I'm stumped, at least for now.

There is no prize awarded for giving me some contest ideas, except for the prizes / gifts / loot that will be given away as we get to said contests.