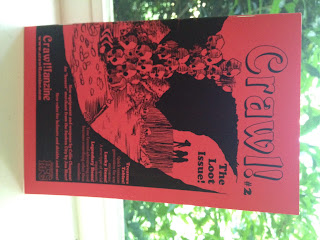 I'm really enjoying the second issue of Crawl! When I read the first issue (I have the cool black cover version) I had just started meandering my way through the DCC Rulebook. I'm now going back and rereading the first issue and I understand things so much better. It was cool before, but it's damn near awesome now. Just to let you know, the 2nd issue is even more so ;)

Crawl! Issue #2 deals with treasure in the DCC RPG. Treasure is handled differently then most OSR / OGL games, as magic items are not just uncommon, they are damn near unheard off at the lower levels. Crawl #2 has a very nice treasure system that works well with the flavor of the DCC RPG, for both special and lucky items in addition to the valuables the party may acquire while adventuring. Heck, this whole extended Loot section is worth more than the price of admission by itself.

The personalities of the Sunken City add a bit of depth to that adventure and I may use pieces of it in the next DCC RPG Arc I run. Jon, you done good.

There are some new, optional combat rules, but the page of new equipment is excellent. I think I will try yo sell my players a "Lucky" Ukulele ;)