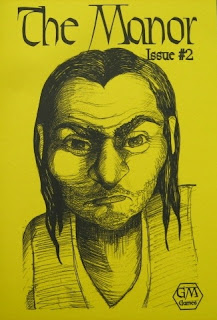 For those of you following at home, the short adventure included in Issue #1 of the Manor is what I used to kick off my sandboxie ACKS campaign about 2 months ago. In a week my party should be arriving at their destination, and I already see that I'll be using the latest issue of the Manor when they do.

Hugo's Healing Potions will most assuredly get used in my current campaign, maybe as soon as next week. I love the personalities that are presented, and the table of random customers / events can easily be used elsewhere (much like the Toys For the Sandbox series). When one article has multiple uses, you know it's damn good.

Smuggler's Inn has a unique hook. The setting local is unique too, and might require planning ahead to get the players there, but that's rarely a problem. Very interesting personalities here too, as well as a list of new magic items, one of which I think I have a player who would kill to get their hands on it. I may yoke that for a party quest at some point.

Stange Things You May Find Under the Cot is a random list of what you may find under the bed your are sleeping in in an Inn. Some of these "things" can turn into adventure seed in and of themselves.

Poetry Slam: Orc appears on the inside back cover, not the regular PDF. Let me explain. Tim has provided both a regular PDF version, and a "print out double sided and fold and staple" version, in case you want a physical version to love and to hold. The Orc poetry appears on the PDF for the cover, inside rear. Hope that's clearer now.

So far Tim is batting 2 for 2. Very impressive. (and I knew I recognized Matt Jackson's map work)

Almost forgot, the Manor is systemless, so it is easy to use with any Fantasy RPG system you are looking to use.
Posted by Tenkar at 9:22 AM