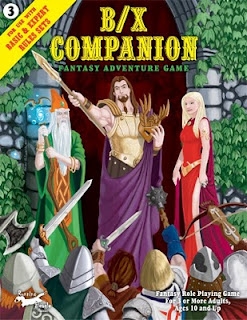 I don't know how I missed this, but the B/X Companion (by JB over at the B/X Blackrazor Blog) is finally available in PDF.  I say finally, as I've had the print version since the 2nd (3rd?) printing and found it to be an awesome resource for both the D&D B/X boxed sets as well as Labyrinth Lord. I've yet to have a chance to put it into action, but one day I do intend to.

So, if you've been itching to get a copy of the B/X Companion but noticed it's sold out in dead tree format, or if you want to put it on that snazzy new Google Tablet that ships in about a week or two, now your chance to own the PDF.

The B/X Companion is a re-imagining of what could have been, had the 1981 editions of the Original Fantasy Role-Playing Game (the Basic and Expert sets edited by Tom Moldvay, Dave Cook, and Steven Marsh) been followed up by a third Companion volume promised in their pages. Using the same format as the original volumes, and working from the hints and info provided in those 1981 editions, the B/X Companion provides rules for high level play, including levels 15th through 36th, 60+ new spells, 100+ new magic items, 80+ new monsters, rules for running dominions, mass combat & siege warfare, astral travel, and more...all in 64 pages.
Posted by Tenkar at 10:43 PM