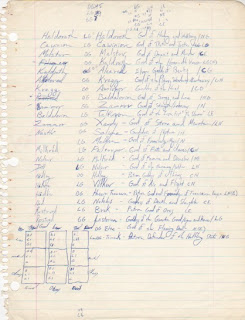 I can't believe I had both the time and the inclination to write up a whole panthon of gods. I'm putting this at around 1986, as by that time I was pretty much a full time GM for my High School / College group, and I was working on my own setting.

Yep, that's also around the time I got my hands on hexagonal graph paper and decided to try my hands at world design. I apparently didn't get very far. It's also a photocopy of the original, which was done in color pencils if I recall correctly.

My issues with world design were that my vision was always much larger than either my ability or my free time. I never completed a world / setting / major geographical area. So I generally found an area in Greyhawk or the Forgotten Realms that was out of the way and pretty much did whatever it was I wanted to do - but with pre-drawn maps and pantheons. 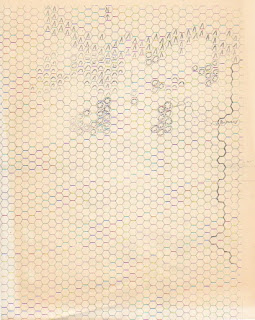 Still interesting pieces from my own collection. I'm half tempted to make the dungeon maps into a new mega-dungeon of sorts for my players. i still have a few more I need to post ;)
Posted by Tenkar at 1:10 PM