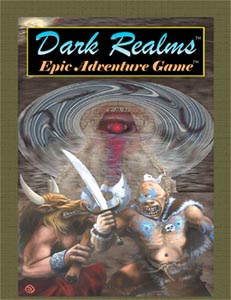 I had to update this as it's been nearly 3 weeks since I last looked at Dark Realms.

When last I looked on September 16th, they had 4 backers and had raised $138.

Alright, honestly - there's no way in hell this is getting funded.

When you are an unknown entity showcasing an unknown game - and let's face it, Dark Realms is an unknown game) asking strangers to invest $45,000 in your business in a niche hobby like ours isn't going to be successful.

If the funding goal had been $1,000 I wouldn't be surprised if they reached it. I'm not sure what good that would have done for their stated goal of getting a million copies into circulation of a game that is most certainly NOT a good introduction to RPGs (I read the PDF - see my first post), but at least it would have been a realistic goal.

My suggestion? Cancel the project, rethink the actual goal and set a funding level between $1K and 2K  with stretch goals if / when there's a relaunch. You gotta crawl before you can walk, and this project aimed to fly.
Posted by Tenkar at 5:10 PM