Mini Review - Through the Cotillion of Hours (DCC RPG Adventure) 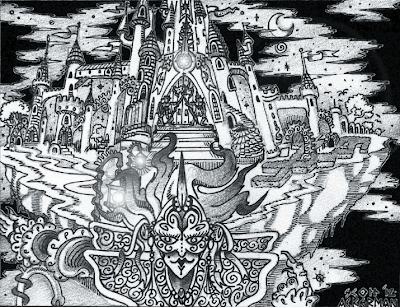 Through the Cotillion of Hours is a DCC RPG Adventure from Purple Ducks Games, and is the third in the Adventure Locations series.

Now, Through the Cotillion of Hours is not your normal adventure, either for the DCC RPG or pretty much any D&D type game (it should be noted that I think this would work well in ANY OSR game system, not just the DCC RPG). This is an adventure taking place in the realm of sleep, a dream world if you will. The players will have the opportunity to achieve something that they are questing for.

Since it is far from your usual adventure setting (and the adventure itself can kick off in the midst of another adventure) the usual rules don't necessarily follow. Time is the players' greatest foe, and it's passage is not always constant or consistant.

It is not a combat driven adventure (although players could certainly turn it into one). It's puzzle driven. Well, maybe not puzzle driven totally either. It requires thought. Not in the impossible "Lich Dungeon" manner either.

It's also a reusable adventure. If players fail in achieving their goal the first time, they may get summoned again at a later time. I like the whole concept, because it is not the normal adventure one would expect in any sense of the word.

The map is well done, and the inclusion of a unlabeled players map is always a boon for online groups. Purple Duck does a very good job with this as always.

Scott Ackerman does the art. Have I said enough great stuff about Scott's work (which also graces the header of this blog)? Much awesomeness. The piece I have above is one of Scott's works from the interior of the adventure. The cover is nice too, but this piece speaks more about the adventure than I can put into words.

If I were to make one suggestion, maybe the pieces could be put together again in the back of the adventure, for use a player aids or visuals. It's always shame when great art is seen only by one of the 5 or more people at the (virtual) gaming table. When I get a chance to run this, it will be with all the art saved and ready to be shown to the players when appropriate to set the mood and tone.


Sooner or later, characters are going to want to quest to achieve some specific end – to raise a fallen comrade, to regain lost ability points, to discover a new spell, to find some new magic item…the possibilities are nearly endless. This scenario can occur at any time during the course of overland travel, and gives characters the opportunity to meet some of these goals.

In this adventure, sleeping characters are invited to the Cotillion of Somnos, the Dreaming God. If they can make their way past the entertainments at the Masked Ball, they can petition the Dreaming God to fulfill some request on their behalf.

Through the Cotillion of Hourse is a Dungeon Crawl Classics Role Playing Game adventure designed for any number of characters of any level.