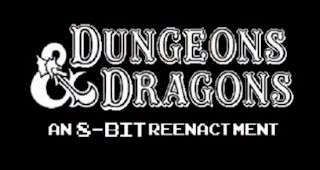 So, last night I ran a session of Greg Christopher's Ambition & Avarice is James Mal's Dwimmermount (you can read a sort of recap of last night's session here).  There was a point in the session where it seemed like Natural Ones were coming up every other attack for the PCs. It was so damn depressing that someone yelled out "I attack the darkness!" and someone else suggested "roll damage" and they did.

It was at this point that Greg half jokingly said something to the effect of "You know, you should get a benefit for "attacking the darkness". As gamers are known to do, we passed ideas back and forth real quick. In the end, we decided to convert the damage to an expo poll, at straight up value. So, if the party "attacks the darkness" 13 times during the course of the session for 47 points of damage, there's 47 points of expo to distribute to the players. It's kind of like "learning from one's mistakes".

I'm going to take it a little further in the next session, because I like the idea of finding value in failure. This will be a "beta rule", which works as we are beta testing Ambition & Avarice.

Attacking the Darkness Pool: Points are placed by the party in the Attacking the Darkness Pool as described above. Points are accumulated in a per session manner, and unused points will be "cashed out" at the end of the game session. At 25 points (and each interval of 25) the party has the option of converting 25 points into a "bennie". The bennie can be used to reroll a single attack roll (but not a natural 1) or saving throw. Points spent on bennies can't be cashed out at the end of the gaming session.
Cashed out points are converted into expo on a 1 to 1 basis multiplied by the receiving character's level. Everyone in the party gets the full value of the cashed out points - they are not divided amongst the players