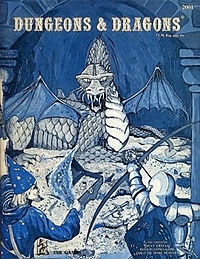 The Results are in and the Moldvay version of the D&D basic set (128 votes / 39% of voters included it) is the most requested TSR Era ruleset that folks would like to see back in print. I strongly suspect the D&D Rules Cyclopedia would have been neck and neck with Moldvay if I had only remembered to include it in the poll.  I'm giving it special mention, as it certainly led in the "write in votes" on G+ and the comments section of the posts here at the Tavern.

The OD&D Boxed Set came in at 111 votes (34% of votes) in both a boxed version AND as a hard cover compilation. Not too shabby. D&D Supplements I-V came in at a respectable 84 votes (26% of the vote). There is a lot of love for OD&D out there, at least from the readers of this blog (not a huge surprise).

So, Wizards, if you're listening, how about getting the Moldvay Basic Set and the Rules Compendium ready for repring after Unearthed Arcana. For old times sake ;)
Posted by Tenkar at 10:46 AM