The First Games of the Hobby - OD&D, T&T and EPT

As I look through the PDF of Empire of the Petal Throne, it strikes me how far we've come since the beginning of the hobby.

Original Dungeons & Dragons, the granddaddy of them all, required the use of a separate product (Chainmail) to resolve combat (the optional combat system became the default of the non-Chainmail possessing masses) and an Avalon Hill boardgame (Outdoor Survival) for outdoor adventuring.  If you didn't have a background in wargaming (and a copy of Chainmail), you probably wouldn't get too far teaching yourself OD&D. 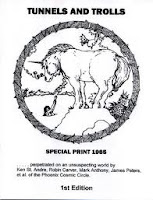 Tunnels & Trolls 1e is a simple game, but it has a horrible presentation that is just as confusing, if not more so, then that of OD&D.  Heck, I'd argue that T&T, right through 5e/5.5e is nearly just as horrible, with class descriptions and information on combat adds to be found only after diligent searching.  This was the anti-wargameer RPG of the time.

Empire of the Petal Throne does away with the Chainmail combat system, going right to the optional D&D combat system as it's default.  It is laid out like a war-game at the time, numbering each section in groups of 100, then by the 10's digit and finally by the single digits.  It actually reminds me of DragonQuest in this way.  (and it might be why they were able to do the very thorough bookmarking of the PDF).  Where it fails is the use of setting and new Tsolyani words right in with the system.  EPT has tighter links to it's setting than early RuneQuest had to Glorantha

None of them would pass muster these days.  This is probably why the OSR clones are as successful as they are.  They clean up and present the rules of the early D&D editions in a way that's easily approachable by new and experienced gamers.

T&T 7.5E is not my favorite version of the T&T rules (I'd go with 5.5e myself) but they are certainly the most approachable and best organized of the bunch, and they are where I would steer a new T&T player.

As for EPT, there have been many versions since the version I've had a chance to look at, starting with the elusive (and generally overpriced TSR edition) and three later editions, the last in 2005.  It's safe to assume that they are without exception, better produced and clearing in rules presentation (though I suspect the have use of Tsolyani terms continue in later editions).

All three are priceless for their historical value if you are a fan of the hobby.  I consider myself lucky enough to own a copy of the OD&D "Original Classic Box", a reprint of T&T 1e (and an original copy of T&T 2e, previously owned and signed by the Trollgod himself) and the PDF copy of EPT's pre-TSR edition.

Email ThisBlogThis!Share to TwitterShare to FacebookShare to Pinterest
Labels: empire of the petal throne, ODnD, Tunnels and Trolls