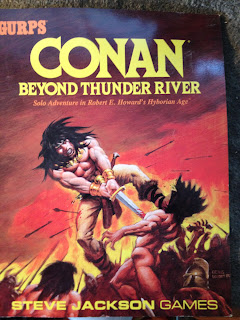 I remember picking up Conan:  Beyond Thunder River at the Complete Strategist in NYC, probably back in the early 90s.  I loved the cover art, and I was intrigued by the idea of a solo adventure, especially for Conan.  The fact that it was for GURPS didn't deter me, as my group at that point dabbled in many systems, and although we don't get too far in any of the GURPS campaigns we started, I was fairly conversant with the rules.  Ah, to be young again, with a brain like a sponge as opposed to the sieve I currently am armed with, but I digress.

I don't think I ever played it.  I certainly didn't play it all of the way through.  It was fucking intimidating!  Characters we had created and used were all in the 100-125 point range - this solo module required a 400 point character.  Heck, even the pre-written Conan sheet in the back was more than I was comfortable with, although I still find it amazing that even a 400 point character in GURPS is still vulnerable. 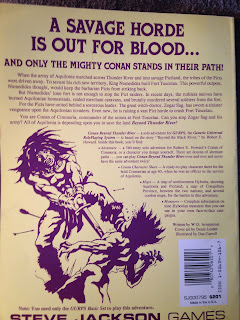 Although I am very tempted to give this a shot, I'm not sure I want to relearn GURPS in order to do so.  I might give it a read through like a solo quest type book, and just assume I survive all of the encounters.  ;)

GURPS always had some of the best sourcebooks on the market, and I suspect this solo is probably on the high end too.

Anyone actually give it a play through?  How was it?