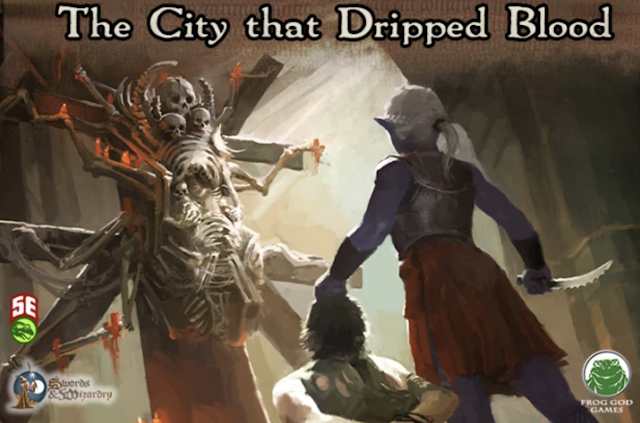 The only complaint I've ever heard about Frog God Games releases is the cost. High quality, full color and the size of textbooks, they seem to often be priced like a textbook. Now it is time for something completely different and yet so familiar. With The City that Dripped Blood: A Fantasy Adventure Frog God is going small.

Frog God Games is testing a new approach with the launch of this project- almost the inverse of how we design our crowdfunding projects on Kickstarter. We call it the 'Tiny Print Run'.

So, what do we get with The City that Dripped Blood: A Fantasy Adventure?


Frog God Games is proud to announce The City that Dripped Blood, the first in a four part series centered in and around the city Temelpa.  This mid-level adventure is written by D & D Legend Steve Winter, whose credits include over 30 years of best selling games, adventures, and supplements for some of the most popular RPG companies in the industry.  He has played a part in many of the most beloved titles from Star Frontiers to the Fifth Edition rule books. He was a contributor most recently to the Frog God Games' Quests of Doom 4 series. Steve's incredible legacy and experience in the RPG world makes The City that Dripped Blood a perfect Indiegogo project debut title.


Temelpa, an ancient walled city on a forgotten trade route, thought to be abandoned ages ago, and now, the adventurers find themselves besieged within.

Unable to leave their refuge, the adventurers will quickly discover the city is inhabited, not deserted as initially believed, by an ancient society. They will soon be embroiled in the affairs of a twisted caste system built on servitude and cannibalism and headed by an inter-dimensional vampiric overlord.

This open-ended adventure allows the GM to unleash an array of unique monsters, factional power struggles, and intriguing plots upon the characters as they fight and scheme to stay alive, entrapped in a hostile city where they are viewed as useful pawns or a tasty exotic meal.

Can the characters hold out until the siege is broken and escape with their lives? Will they champion the cause of the downtrodden and upend the social order? Or will they be the main course for the next cannibalistic feast?

Welcome to the City!