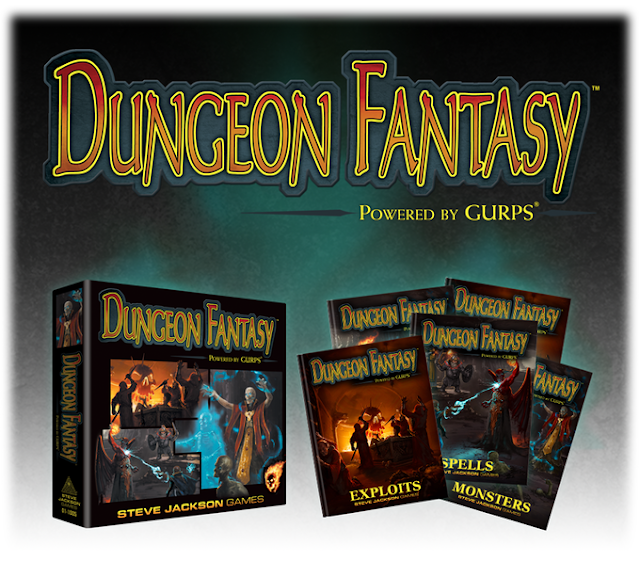 I played a significant amount of GURPS in my early college years. I owned Man to Man and Orc, which highlighted the combat system that was to become GURPS. First edition boxed set. Most of the 1st and 2nd edition supplements. Conan solo adventures. Lots of GURPS. The problem as we saw it wasn't that GURPS wasn't a good and balanced system. It wasn't the lack of sourcebooks. It was the lack of adventures and, from the viewpoint of D&D players, the lack of dungeon crawling.

$50 for a self contained boxed set?

Adventurers (128 pages). GURPS is famous for letting you play any character you can imagine. Dungeon Fantasy keeps this flexibility while trimming away unnecessary details, concentrating on just what matters to monster-slaying, treasure-hunting action: Pick from 11 classic professions and nine playable races, customize your alter-ego using quick-start templates and a powerful point-build system, and gear up with an equipment list that offers dozens of weapons and lets you assemble exactly the suit of armor that fits your image.

Exploits (112 pages). Learn how the heroes actually use their abilities and gear. That means combat, of course – and dozens of other activities, whether your thing is sneaking around, swinging from the scenery, exorcizing evil, or getting rich through cunning deals in town. This book also describes countless bad things that can befall adventurers (poison, traps, dismemberment, lava pits . . .), as well as good things, namely loot. And it’s full of practical advice to the Game Master who leads this three-ring circus: challenging the players, keeping the action moving, settling arguments, and much more.

Spells (80 pages). What would fantasy be without magic? Adventurers features four spellcasting professions (bard, cleric, druid, and wizard), and this volume describes over 400 spells to help you customize them. It also includes complete rules for how spells work – whether their power comes from the gods, Nature, or creepy tomes of forbidden wizardly knowledge.

Monsters (64 pages). Once the adventurers are ready, and armed with weapons and magic, it’s time to test their mettle! This catalog starts you out with more than 80 things that want to bite, claw, grab, sting, and curse the heroes – not just the predictable orcs and zombies, but also several Dungeon Fantasy originals. Each offers notes on tactics and variants, and the whole collection comes with advice and rules for adventurers dealing with monsters . . . and monsters dealing with adventurers.

Dungeon (24 pages). I Smell a Rat is a simple (but not simplistic!) quest designed to show new gamers the ropes. Like any classic hack ‘n’ slash adventure, it starts at the inn. From there, the heroes will find themselves facing traps, enemies, and unexpected twists – and finding treasure, although not necessarily gold and silver. Advice and “adventure hooks” let the Game Master challenge advanced players or spin the tale into a series of adventures.