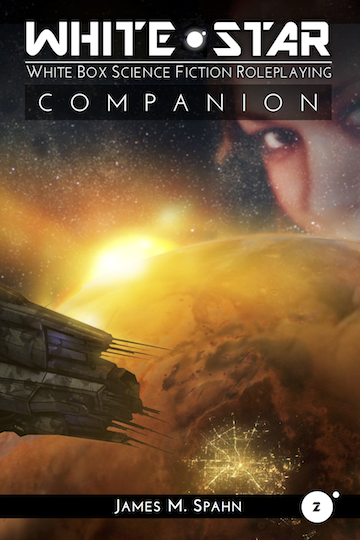 We've had some strong OSR Deals of the Day the past few days and today is no different. The White Star Companion adds new classes, new weapons, new star ships - heck, it simply adds a whole lot to your White Star campaign. For the next 24 hours it's 40% off in PDF and on sale for $4.19.

+James Spahn did an excellent job with White Star and the White Star Companion notches that up to 11.


Daring Men of Tomorrow and intrepid Deep Space Explorers face off against a horde of savage White Simians in the floating jungle of a lost world. Plucky Sidekicks escape relentless Bounty Hunters aboard their modified skyboards. Somewhere on the edge of the galaxy, an Orbital Battle Station is about to obliterate an entire planet with the push of a button.

With the White Star Companion, you'll expand your game to the edge of the galaxy and beyond! White Star: White Box Science Fiction Roleplaying is completely compatible with Swords & Wizardry WhiteBox and many other old-school roleplaying products.