Ravenloft Returns with The Curse of Strahd for D&D 5e 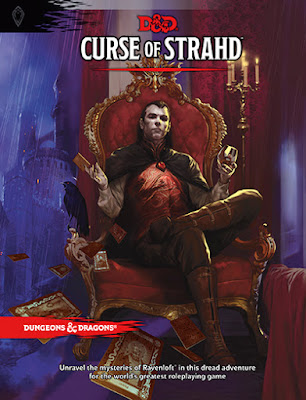 Ravenloft always held a strange place in my D&D gaming. It was never treated as a setting unto itself and the few times my party did wander into the mists it was universally unsatisfying. Pinocchio rip offs and the like run close to Halloween, the dread was mostly in the setting itself. Of course, we are talking the AD&D 2e days, where you couldn't throw a die without hitting a setting released by TSR.

Today WotC announced the first Ravenloft release for D&D 5e. I'll be interested in seeing the feedback in March when it does release. Not sure if I'd drop my cash on it without seeing the response from the gaming public first.


Today, Wizards of the Coast announced Curse of Strahd, a new Dungeons & Dragons adventure set in Castle Ravenloft and the surrounding land of Barovia. Written in collaboration with Tracy and Laura Hickman, the authors of the original Ravenloft adventure published in 1983, Curse of Strahd pits players against the vampire Strahd von Zarovich. Curse of Strahd will be available to everyone on March 15, 2016.

So, not written by Tracy and Laura Hickman then I'm guessing, just some input? Ah well, here's the link to the rest of the press release.
Posted by Tenkar at 7:01 PM