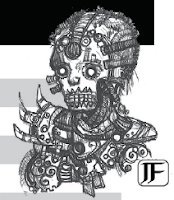 I was really excited when +James Spahn offered to run a White Star session with +Joe D and +David B and myself last night. I nearly pissed my pants when James allowed my request to play the Scoundrel class I wrote up last week. This was gonna be mega fun :)

Needless to say my character's name was Kyn Vittman and our ship was called The Kickstarter.

So, we had to recover some data from a mining camp. When we landed the doors leading from the landing pad wouldn't open and the electronic lock mechanism had been ripped from the wall. David, our Star Knight tried to rewire it. He failed and took a small shock, at which point he decided to carve a hole in the doors with his Star Sword. I like this lock bypassing system.

We enter the room adjacent to the hanger and get attacked by reprogramed cleaning bots. David and I took down the bots with a single blow each - he with his Star Sword and me with my mono axe. Kyn let out a blood curdling roar in celebration and then inquired as to the possibility of repurposing the bot he destroyed to look serviceable. Alas, it was damaged beyond his ability to cover up the damage. at best, it would sell for scrap.

Next room was occupied by Space Savages. Kyn tried to get the drop on them (First Strike) but he failed. Still, we managed to take them out with minimal damage to the others and we finally got to see Joe's laser rifle in action. We were also finding loot, including a laser pistol which went to the Star Knight. That was fine, because I intended to avoid combat where possible.

In the kitchen we found some dead miners and a living coward. The savages had missed the survivor who had played dead. After throwing water on him and getting little info of value, we tied him up like a hog for slaughter and left him to gather up for later. We couldn't risk him taking our ship.

So, now we headed to the south side of the initial room. There was a door just beckoning us, so I let the others open it. Hey, I spent my money on fine clothes and a cool axe. No need for me to get dirty when others can do so instead.

The open the door and I hear a "whirl" sound. I dive to the side of the doorway as I have no ranged weaponry (see? always thinking) The others confront to ceiling based laser turrets. Zap! Zap! I drag the bodies away from the doorway and remove their weapons and armor. Star Sword, laser rifles, 2 laser pistols, 2 med kits, a couple of hundred credits and some odds and ends. Oh, and a ship to cal my own, at least until I can find some suckers, er, I mean "loyal companions"  to join me on the next job. I figure I should be able to get at least 80% retail for the extra weapons if I sell to my future companions instead of the 50% or less I could expect at a pawn shop. We're all winners :)

I forgot to ask James if I leveled...