Next Saturday the DCC RPG Campaign Will Start - It's Funnel Time! 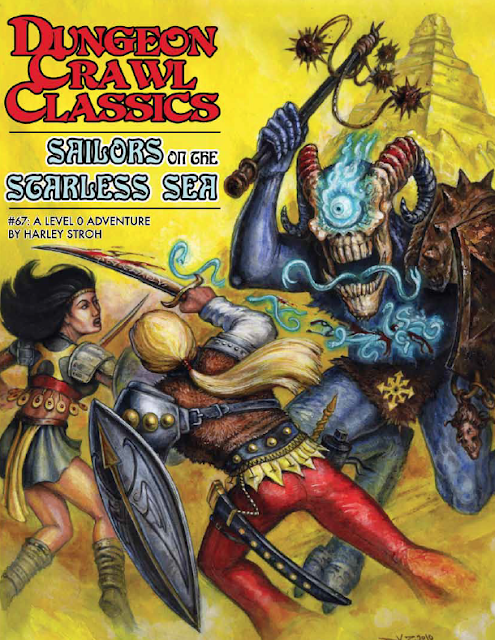 It looks like we'll be switching up between the classic Against the Giants AD&D series run by +Joe D and some DCC RPG adventure run by me. Should be fun. I've enjoyed my chance to play as a player and not the DM, but I also enjoy running games. This seems like a very good way to keep things balanced.

At the end of last night's session, I told everyone to go to the Purple Sorcerer site and roll 3 sheets of characters (using 3d6 in order) then pick the 3 characters they want to use in the funnel. One straight up stat swap per character. Sure, on average the characters are going to have slightly higher stats than just rolling 1 sheet and picking 3, but as I plan on running this as a campaign and not a series of one shots, the opportunity to have qualified funnel survivors works better for my group and I. Besides, no matter the stats, all funnel participants are just as squishy as the other - for the funnel I expect the usual lethality ;)

I'll be running with a version of my idea of the players having a "stable" of available characters. I'm thinking three, but we'll see what shakes out in the end. I'm also thinking of allowing the players to distribute a number equal to half the expo earned by their active character at the end of a session among their two inactive characters.

Toying with the idea of an "organic sandbox" of sorts - very localized initial setting, with rumors and treasure maps to lead the party astray ;)
Posted by Tenkar at 9:28 AM