I now have Critters, Creatures & Denizens for the DCC RPG in print and the fucker is killing me under it's crunch. It seems, now that I've sat down with it and read it more fully, there is little here that I will actually use at my table (with the exception of screen-capping the excellent +Scott Ackerman art for use in my Roll20 games). Scott's art is inspirational, but the the charts and extra monster stats are doing the magic of the old NyQuil for me.

So, then i thought "why not use another Appendix N influence RPG for inspiration?" Which of course let me to break out my copy of Astonishing Swordsmen & Sorcerers of Hyperborea. It also came to mind because it was nominated for like 3 or 4 Ennies earlier today. What can I say?

Now, as much as DCC is in need of a setting, AS&SH is too much a human-centric setting game wise for me to easily convert one to the other. YMMV. It is, however, as simple as converting AC to use the creatures in the AS&SH Bestiary in DCC. Not all will fit, and some may seem too common, but there are some awesome inspirational winners. Tonight, I'm looking at Orcs.

Here's the relevant text and art: 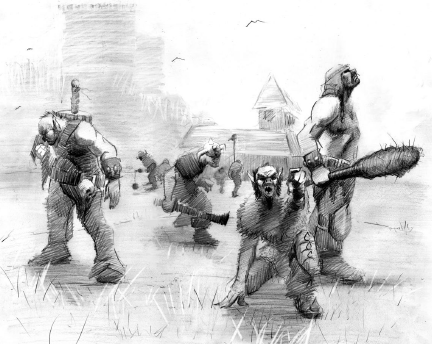 These despicable humanoids are the unhallowed progeny of swine dæmons and an abominable tribe of Picts. They are stocky, short-legged, thick-boned, and heavily muscled, but their features are horribly disfigured and oft porcine, with pronounced lower canine teeth. In the wilderness they are largely nocturnal, but in subterranean lairs not necessarily so. Orcs are temperamental and prone to infighting, but under a strong leader they are capable of exceptional obedience. They are a violent species, killing for pleasure, and they relish in torturing and burning their victims; too, they are notorious slavers.

Orcs are intelligent enough to manufacture their own weapons and armour and perform other feats of simple engineering, but their craftsmanship is generally inferior to human standards; hence, a suit of orcish plate mail might provide AC 4 instead of AC 3 (otherwise orcs have natural AC 6 from their thick hides). Orcs speak their own language (Orcish) and oft a crude form of the Common tongue of man; some are able to speak a smattering of Pictish.

These are The Orcs I want to use in the DCC RPG. They'll make for one exciting "random encounter" between adventures with their built in flavor or even a full adventure. My wheels are turning :)

Notice I didn't bother copying the stat blocks for this example? In Appendix N style gaming, stats take a distant second to flavor.
Posted by Tenkar at 9:19 PM