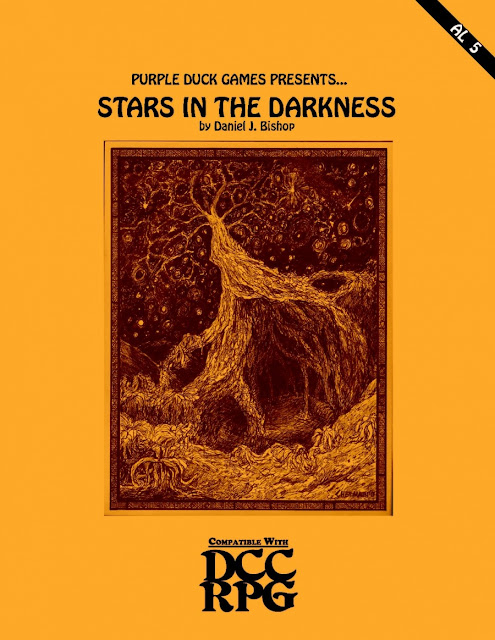 I've been doing reviews of gaming releases pretty much since I started this blog. Generally speaking, if I take the time to review it, its because I like the product. Still, after a while, much of it gets to seem familiar. Stars in the Darkness is NOT familiar. There is no deja vu. There is only awesome. Fresh, new, and lethal as all hell. I want to be a player in Stars in the Darkness, and if I survive to the end there will be epic stories to tell. If my character falls, it will be an epic death.

Let me give you the blurb, just to set the stage:

In millennia past, the ancestors of the elves protected the stars as they followed their courses, for there are wolves in the outer dark.  Yet what manner of creature would dare to consume stars as though they were sheep in the field?  And what has become of the ancient starherds who once stopped such monsters?  For such a monster is back - Urstah, the Star-Drinker.  Stars are disappearing from the night sky, and with the loss of those stars, luck is being drained from the world.  Your luck.  Dare you enter the caverns, face the star-drinker, and release the stars in darkness?

Stars in the Darkness is a DCC adventure designed for four to eight, third level characters, that can easily be dropped into your campaign.  In it, characters seek to stop an ancient evil from arising, with possibly devastating effects should they fail.  This is our largest, and most epic, adventure for DCC to date.

This most certainly is epic. It is one of those rare adventures that you need to read through three times, write in the margins and use a highlighter, not because it's confusing, but because there is a lot of cool shit going on and you'd want to make sure your players get the full experience.

I want to be a player in Stars in the Darkeness. I want to cross the Bridge Over Infinity, Fight a Mormung and flee from... no, that would give too much away. This is too good to spoil, and I feel like it may be spoiled for me, as I so want to play in this adventure.

Seriously, I can give no greater compliment than I would love to be a player in a campaign where  Stars in the Darkness would be there for us. Waiting for us.

+Daniel Bishop you done did good. Fucking good. I owe you a beer :)