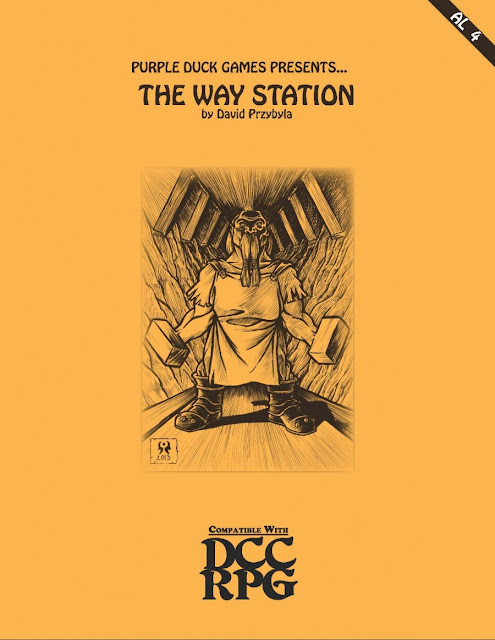 Let me get this out of the way first - the author of AL 4, The Way Station, is a regular player in my Saturday Night AD&D / OSRIC campaign. Which means I know +David Przybyla as a gamer and consider him a friend. I doubt anything in the following review is going to change that, but I figured the readers have a right to know.

It's been a while since I sat down with a DCC RPG adventure. What draws me to them is the uniqueness of each one - they try to avoid repeating the common dungeon environment.

The new monsters presented are dangerous as all hell. It's a damn good thing that a 3rd level DCC RPG character is much more powerful than the average OSR character of the same level. If I were to port this over to say OSRIC or S&W, I'd say this would challenge characters of 5-6 fairly well.

What I find even more exciting than the adventure, which is well done and should play out in a single evening - assuming the party survives, is the implied setting of the ancient dwarves  their descendants  their patron and their conquerors and their descendants. There are campaign seeds here just yearning to be expanded upon, which is what a good adventure should offer it's readers and players. The Way Station offers that and then some. I really do want to play in the world The Way Station takes place in.

Then I saw this:

It's all open content. Anyone can grab the ball and run with it. I'd really like to see more of what David has up his sleeves, but it's nice to know it's there for anyone to expand upon.

All that and Purple Duck gives us both a keyed and unkeyed version of the map - prefect for using in online play. I with I had unkeyed maps for Rappan Athuk.

The Dwarves of Upanesh were prosperous and widespread; their transport/mining system was efficient and admirable.  Their ancient downfall was tragic, but not without its heroes. Minoc Manshield and his mystical hammer Stone Fist, tools of the great god Upan saved many of his people and took many invaders with him, in the humble battleground of a Waystation… can you pierce the subterranean depths and recover Stone Fist?  Who or what still remains in that desolate domain of death?

The Waystation is a DCC adventure designed for four to eight third level characters, that can easily be dropped into your campaign for a short ‘detour’, or be part of further adventures in the realms of the Upanesh. Stone Fist awaits!