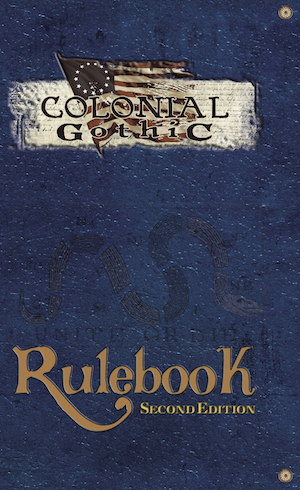 For a bit of background, I have my BA in History, with my concentrations in Early American History and The Middle Ages. You study what you enjoy, as it makes the hard work just a tad more enjoyable. So when I saw that the Colonial Gothic RPG had just released a a new edition of the rules (which I had missed the first time around) I had to take a peek.

Under the hood it uses the same D12 system as Shadow, Sword & Spell. (I have SS&S and will have give it a second look at some point, as I have now found the system intriguing)

I like the alternate history of Colonial Times that is shown. I like the idea that you can set a "dial" of sorts for the campaign's horror component - not all groups will be comfortable going "all in". I really like the flavor. I really like the adversary / creature design chapter. Heck, I'd love to do something similar for the OSR (I know of Raggi's Creature Generator, but it doesn't always fit my needs)

There's no short adventure to kick things off with. Believe it or not, although they often feel like throw aways, this little pieces often showcase how a game system works and make a good example of game design for the rule system. Coming from my OSR roots, I'm sure I could bang something together but I'm not sure it would good fit for the system.

I guess I'll need to track down an introductory adventure at some point.

The great nations of Europe struggle for control of the New World. Native Americans struggle for their land and their lives. Planters and traders struggle for wealth and position. A new nation struggles to be born.

But look beneath the surface.

There is a secret history, and this history deals with events that took place in the shadows. These events played a role in the history of the American colonies and the Revolution that few know about.

The truth is hidden, and plots are afoot. Events are moving behind the scenes, and lurking in the shadows are agents with their own agenda.

The Siege of Boston is lifted, and General Washington is leading the Continental Army to New York. The enemies are many, but as to who they are, you do not know.

Colonial Gothic is a supernatural historical horror roleplaying game set during the dawn of the American Revolution.

This Second Edition rulebook is fully compatible with all previous Colonial Gothic adventures and sourcebooks.