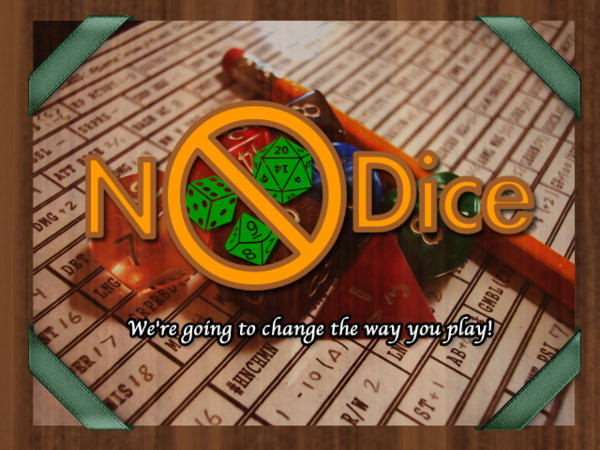 Lets say you do much of your gaming online, perhaps using Google+ Hangouts. Going a step further, we'll say you use Tabletop Forge or Roll20 as your gaming interface within Hangouts - you know, for the dice rolling, mapping and such.

Tabletop Forge is a bit less robust than Roll20, but TTF is totally free, Roll20 has a minimal subscription if you want all of the bells and whistles but can also be used for free.

Do you feel the need to layer yet another program on top of one of these two?

I don't, but if you do, No-Dice.Net is there to fill the niche for you. Alright, maybe not yet and maybe not ever. You see, No-Dice.net is trying to offer a few extra functions using an open API, but TTF, Roll20 and even Obsidian Portal would have to actively support N-D.N. If they don't support it, much of what it offers isn't really going to do much good.

Let me quote their aim:


No-Dice.Net is an ambitious project to modernize tabletop gaming.  It will be a central hub for dungeon masters and players to store character sheets, create battle maps, develop new game rules, plan campaigns, and find groups.

Because of No Dice's rule set creation engine, any rule set can be supported with a little work, but there will also be pre-built sets available for purchase. These rule sets won't cover every aspect of a given game, but they will cover character generation and leveling.

All of our tools will be accessible through an open API to allow easy integration within other sites and applications.

No Dice, LLC will also be developing a standard XML data format for characters, rulesets, and maps so that other applications can be made compatible.

No-dice.net will feature many social aspects to connect players. You’ll be able to share your campaign, character sheet, etc with the world, and keep track of your gaming group.


Video Chat/Collaboration Plug-Ins for On-line Play (G+ Hangouts plus TTF or Roll20)
Badges/Achievement System (is this needed for RPGs?)
Campaigns can be marked “LFG” and Searchable (schedule a game and send out an invite via G+)
Integration With All Major Social Platforms (G+ seems to be where the gamers are)

It a hugely ambitious goal they have set for themselves (I've barely scratched the surface with the text I quotes). I'm just not sure how much of what they offer is really needed, or if needed, isn't already being offered by another app or website.

They say if they make their goal of $33,000 this will be ready to roll by December 2013, effectively halving the time to develop it without funding - which would put the unfunded date at 2014. Even with the 2013 date, it is quite likely some of what they hope to accomplish will appear in other apps, including the ones mentioned above.

I must not be the only one seeing it this way, as with 8 days left in the funding cycles, they've raised $265. This is a "Flexible Funding Project", so whatever is raised will be distributed to the organizer of the project upon completion.
Posted by Tenkar at 5:24 PM