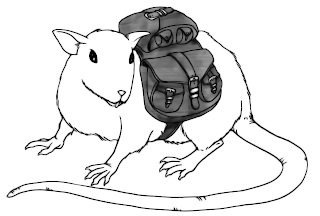 
This appears to be a stuffed “plush” toy rat, but if the activation word on the label behind the right ear is read, it turns into a 3’ long white rat with three large saddle bags over it’s back. It can carry up to 150 pounds that might otherwise fit into three large backpacks.

The rat follows behind it’s master by a distance of 3-5 feet, and is considered to be AC 2/18 with 20 HPs if attacked. The rat may hiss or spit at it’s attacker, but it has no attacks itself. If reduced to 0 or less HP, it reverts to stuffed toy rat form. Saves are made by using it’s master’s saving throw table.

The rat can remain in 3’ long rat form indefinitely. It needs neither food nor water, and does not defecate. Using the command word will return the rat to toy rat form.

This is one of the items from a soon to be released project I am working on for Occult Moon. The rocking art is by Teo Tayobobayo. Yes, I am playing catch up to the artist right now ;)
Posted by Tenkar at 5:22 PM