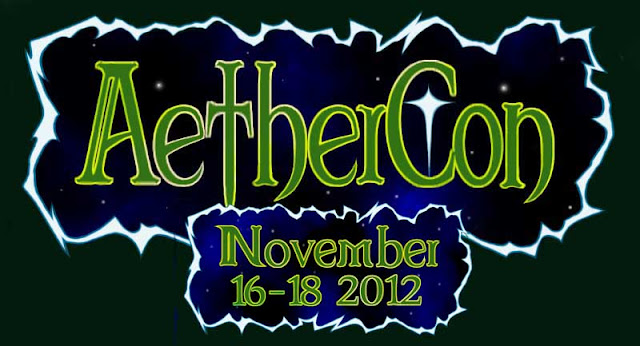 There have been a couple of Online RPG Conventions I've seen so far (and actually popped into and out of one a few years back, before the advent of G+ simplifying the whole online social world) but AetherCon is the first one I actually plan on attending. Or logging in for. I'm not sure of the proper terminology in this case ;)

Now, what makes AetherCon more like a real con? To my eyes, it's the involvement of RPG publishers, both in supporting the con with prizes but also manning virtual tables, just like at a real con.

I might jump in and play in a Savage Worlds or Castles & Crusades game. Heck, I might even be tempted to run a game, but if I did it would be a DCC RPG session. A zero level funnel, so you can easily grab folks that don't have much or any knowledge of the DCC RPG and throw them in the shallow end of the piraña pool ;)

They'll also being running Tournaments for Call of Cthulhu, Pathfinder, Shadowrun and Savage Worlds. The prize pools are nice, but I don't know any of the rules well enough to be one of the last men standing after 3 days of gaming. Maybe if it was AD&D 1E...

Roll20 looks to be the interface they will be using with G+ Hangouts. I guess that means I should log into my account again. I saw they fixed the whiteboard, so all should be good now on my end.

As games and times start getting listed I'll be posting more about this. It looks pretty cool, and it it's half as cool as it looks it could be, it should be an a blast of a gaming weekend.