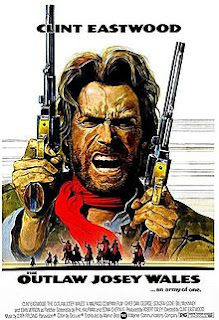 "Dying ain't much of a living boy!" - Josey Wales

The quote came to me this morning (excellent movie BTW) and it's fairly applicable to the OSR style of play in general. By that, I mean there is an expectation that PCs may die, especially at earlier levels.
Heck, over the last 2 weeks, I think I have 3 notches on my belt, and I'm not running a DCC RPG game right now either ;)

So, at low levels, PCs get to meet death intimately - but something happens as they survive and level. HPs rise, AC gets better and they are no longer as susceptible to swingy things like damage rolls. Threat of death retrenches.

Solution? Save or Die mechanics, which I'm not enthralled with when they are over used, but they are extremely useful in keep the players and their characters on their toes.

I just don't see the need for save or die at lower levels. A trap with enough potential damage is a similar to a save or die situation without putting the onus on the player failing a roll - it falls instead on the trap itself and the damage in generates.

In general, I like to keep the use of Save or Die at a minimum - enough to keep players on their toes, but not so much they expect every door to try and kill them. It should be in the back of their mind, but not their focus.

How do you use Savor or Die? Do you not use it? Why or why not?

Email ThisBlogThis!Share to TwitterShare to FacebookShare to Pinterest
Labels: gaming thoughts, save or die