Adventurer Conqueror King or Die! - May Have Passed On... 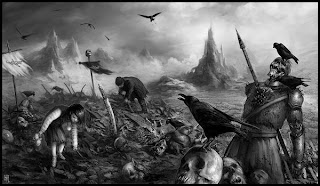 Tonight will mark the 3rd session of Ambition & Avarice, or as I like to call it - Anarchy & Ambition ;)

I'm no longer even sure when was the last time that we ran a session of ACKS at this point, and the summer wasn't friendly to the weekly sessions. That, and the original Adventurer Conqueror King or Die! campaign lost an original member, then we added two players to the group for A&A playtesting, who I assume are sticking with the group even after we end the playtesting.

There are, of course, an abundance of options.

We could stick with using ACKS in a new campaign, but I think ACKS will be easier to run (and have more internal consistency) when the default campaign for it is released. There are lots of references to a default setting in the classes, but little actual info in the core book itself. It makes it awkward at times to fit it into other available pre-written settings without some crowbarring into place. I'd like to avoid that.

I'd prefer to run a system that is available for free, so my players aren't obligated to purchase the rules. When you game at a physical table, sharing one or two copies of the rule book isn't an issue - over G+ hangouts it is virtually impossible. This would leave me looking at LL and S&W (or even A&A) for the most part. Yes, there are others that are free, but these would be the big two.

We could also go with a game that has a nominal cost in PDF - AS&SH and Crypts and Things would allow for a different game feel - more Swords & Sorcery. If I went that route, I'd offer to purchase the rules in PDF for any player in the current group that doesn't have access. Why? Because I'd hate to drag along a bunch of friends to a system that might not click for them and charge them for the act of getting screwed ;)

I'm also tempted, ever so slightly, to take the 3e setting of Midnight and strip it down to OSR friendly levels. Just an idea, as it is a dark and almost hopeless setting to put the players in. Less heroism and more pure survival.

Ah well, just thoughts for now - A&A in about 6 hours or so. Lets see how it plays out when they hit a new dungeon location.
Posted by Tenkar at 3:02 PM

Email ThisBlogThis!Share to TwitterShare to FacebookShare to Pinterest
Labels: acks, ambitions and avarice