Some Words of Advice - From Anomalous Subsurface Environment 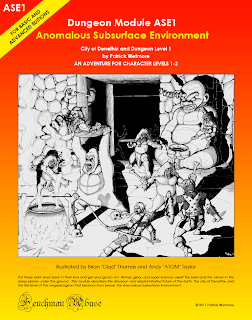 In case you've missed it, I'm on a bit of a "mega-dungeon" kick recently, and as such I'm giving stuff that I picked up earlier and read in bits and pieces a second read through. So, in addition to looking at the adventure I'll be running tomorrow night, I've been looking at Anomalous Subsurface Environment.

If you haven't checked out ASE yet, it does not use your standard fantasy roleplaying setting as a background. Players should learn most of these differences through play, but I'll just say there is a smidgen of science fiction in the fantasy.

In any case, Patrick Wetmore does a fine job of giving advice to players new to "Old School" style gaming, and I thought I'd share it here. Hopefully next week I'll be able to give a bit of a review on ASE (work hell permitting - I'm pushing off the Labyrinth Lord session to the end of the month, as I suspect the next week and a half is going to sap my energies).


• You will probably die at some point. Possibly repeatedly. That's OK, rolling up a character is quick and easy. Don't take it to heart.

• This is a game of exploration, not of combat – you get much more experience from gathering treasure than from killing things. It often pays to avoid a fight when you can.

• This is also a game of wits – the environment is often a puzzle, and often something you can use to your advantage during combat.

• And it's also a game of resource management. Make sure you've got enough water, rations, and torches to get where you're going and come back alive.

• All that goofy stuff like 10' poles, spikes, and mirrors is on the equipment list for a reason. Mirrors are useful for looking around corners, poles are great for poking things from a distance, and spikes can hold doors open or closed.

• All that stuff weighs a ton, too. Make sure you don't carry too much, or you won't be able to move very quickly.

• Please tell me somebody bought some rope. Never go anywhere without rope.

• Somebody needs to make a map. If you don't, you'll get lost underground and die cold, lonely, and afraid.
Posted by Tenkar at 5:23 PM