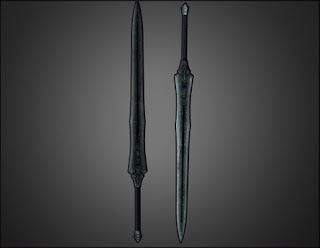 BackBiter is a magic short sword made out of a black metal - even it's edge is black. It's edge is keen, however, and imbues a +1 adjustment to the blade's damage in combat (no adjustment "to hit"). The blade's special enhancement comes into play when the PC's opponent exposes their back to him. At this point, the player may opt to attempt a backstab (+4 hit, x2 damage). If successful, the blade may not be used again to attempt a backstab for a full 24 hrs. If unsuccessful, further attempt may be made when the opportunity presents itself, up to and until a successful backstab attempt is made.

As a side effect of the black metal, a thief can hide in shadows with Backbiter in hand without fear that light may reflect off of the blade.

There is more than one Backbiter in existence. There have been at least two daggers made to the exacting magical specifications and one long sword is rumored to exist.
Posted by Tenkar at 8:56 AM