Not a Review - Torture (RPG Minigame) 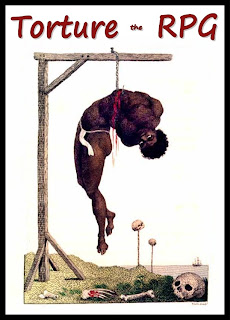 I find it amusing that as much as I remark (not so much complain) about the frequency of torture popping up in the sessions of ACKS that I run, someone has actually released a torture based RPG mini game aptly named "Torture".

I have no current plans to review it unless I get a few requests. It's not so much that I find the idea of torture in an RPG as repulsive, as it often can further a story line, but I'm not sure how comfortable I am with a game system built around the concept. Torture should make players (or the GM) uncomfortable and turning it into a game mechanic trivializes that in my eyes.

Or maybe I'm wrong - maybe giving it a mechanic keeps it from turning into some weird slasher flick D&D session.

There's an in-depth look at it from one of the reviewers up on RPGNow.

Now, as for the cover image that is used - calling it politically incorrect is probably an understatement (and I really don't care much about "political correctness" in general). As for the torture aspect of the image - I suspect the victim is dead and doesn't know it yet.
Posted by Tenkar at 9:23 PM