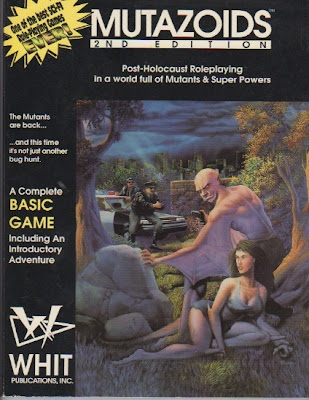 Oh my God! Look! The blurb on the cover says "One of the best SCI-FI Role-Playing Games EVER!" It must be true!

Look at that cover.  Cops with their black & white patrol car and six shooter revolvers confronting some sort of bat-man and a scantily clad woman with horns at her knees and elbows. Hubba hubba!

Hmm, here's a quote from the back cover:

"Players create Enforcers - the futures equivalent to police officers who carry out laws passed by the cruel government known as the Second Republic".