What Dead Horse? A Short Chat With James Raggi 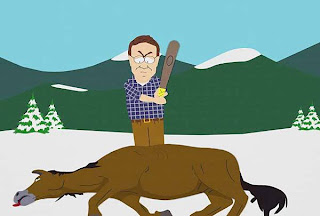 Who the fuck cast "Raise Dead" on this dead horse? heh

Anyway, I spoke with James Raggi earlier tonight via Google Chat, and he has many of the concerns I do about the funding of the current projects. Some of his assumptions did not pan out as well as he expected. Apparently, fans of RPG authors are not the same as fans of fiction authors - they don't run out to grab the author's latest necessarily. Live and learn.

That being said, James may be adding a new twist to the current projects. When he does (and hopefully he remembers to give me the heads up ;) I'll post it up here. As we all know, James tends to think out of the box. I'm very interested to see what else he has up his sleeve (and no, he didn't tell me - not even a hint). There are a handful of projects I'd like to see get funded - hopefully James' push next week will make things a bit more palatable.

He did speak with me about an upcoming limited print release + PDF he is working on. Not sure how much I can speak about it, but I will say this - I love the title, I cringed at the subject matter (he had artists turn down the work based on the subject matter), I will find a way to run it in my current ACKS campaign when it releases, and those that like to rant about distasteful and offensive gaming material and like to start petitions will have their second coming (someone please make sure the "Research Assistant" is notified when it gets released - he has me blocked - heh). Of course, James is self published, so he can tell them to "Fuck Themselves".

I'm really looking forward to it, as you can tell :)