A Game That Can Now Be Named - Everything is Dolphins 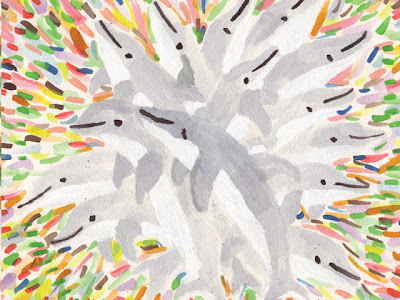 Yep, we're now allowed to talk about some of the games we've played at the weekly Games That Can Not Be Named (next session is Wed, 2/15/12 from 7 to 11 at night, 138 Sullivan Street NY NY at the SoHo Digital Arts Gallery - tell them Tenkar sent you, maybe they'll stamp my card or something).

Alright, so, here's the skinny.  I was quite crestfallen when I heard there was a game of OD&D, being run by one of Gygax's early players in EGG's home campaign, and I was being shuffled off to play some Dolphin Game.  That was three weeks ago.

So it was quite surprising that within 15 minutes of playing Everything is Dolphins, not only did I forget there was an OD&D game going on, but I was also quickly getting the hang of playing a dolphin in a game vaguely reminiscent of the Sega Classic: Echo, The Dolphin.  Especially since I had had a harpoon gun as my sole artifact, and I wasn't afraid to use it.

I had a blast playing this game.  It reminded me a bit of Toon, in that it worked best once I accepted that silly was fun.  Lethal silly, almost on the levels of Oh Shit! Run!, but as character generation takes like 5 minutes (2 if you aren't fighting over access to the rule book), dying ain't no big deal.

Oh, and if you do fun the Kickstarter for Everything is Dolphins, I can tell you that you won't be getting Pre Release Test Copy 6 of 10.  That one is mine ;) 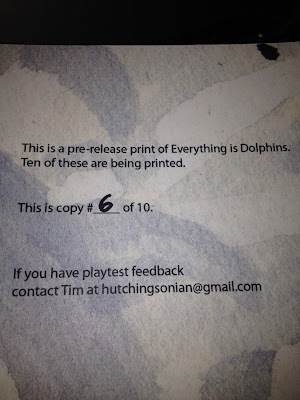 Email ThisBlogThis!Share to TwitterShare to FacebookShare to Pinterest
Labels: everything is dolphins, games that can not be named, Reviews