Where's My Weekend Rant Gawd Damnit!?! (A Look at Monte's Postings Prior to 5E's Announcement) 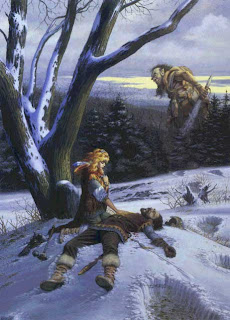 I'm getting kinda used to finding some of Monte's latest 5e market speak and breaking it down as the angry gamer.  Problem is, I think I covered much of it already.  Still, I have a lot of confidence in Monte's ability to give me a shit load of corporate feel good bull shit that he'll be shoveling our way tomorrow to more then make up for it.

So, what did I do to kill the non-ranting time?  I read Monte's columns from the start of his second tour of duty at WotC (the company well known for it's Christmas purges).  This man was dropping 5e Easter Eggs like they were going out of style (I always hated that saying).

From his first column in September:  Imagine, then, if the rules of the game allowed each character to have a ""rank" " that indicated how perceptive they were, and if all the hidden things had a rank as well. You could quickly and easily compare the ranks. If the character's rank was equal to or higher than the rank of the secret door or other hidden thing, he could find it if he took the time, because it was easy for him. No die roll needed. He can just do it because he's very perceptive. If the rank of the hidden thing was higher, though, he could still try to succeed at a die roll. It's challenging, but not impossible (the sweet spot, if you will). And if the difficulty rank was a lot higher, it would just be impossible, and again there's no need for the die roll. (you can't tell me he's not talking 5e)


Then in October: it might be worth taking a look at giving everyone more opportunities to aid their comrades. Not just with healing, but with actions and abilities that help others to do well. You could, for example, institute more generous "aid another" or cooperative action rules. Heroic characters might be able to step in and take damage for their endangered allies. You could, in fact, tailor a special option toward every class that gives them some unique way of helping their friends.  (if this isn't part of 5e I'll eat those perforated pages from the back of my 1st ed AD&D DMG)
It's important, I think, to acknowledge and preserve the game's roots. Even as we create new material for the latest product, we should be looking backward to see if there are lessons to be remembered or bits of the past to bring forward, because just about any monster is someone's favorite creature or figured into someone's favorite adventure, and that player or DM is going to want to keep using that thing he or she loved... this isn't true of just monsters, of course. Spells and magic items, for example, are important legacies of the past. This is perhaps also true of something like feats, but I believe it's more relevant to monsters, races, spells, and items, because these things all carry story weight as well as mechanical weight. A DM who creates a 1st or 2nd edition world with modrons in it shouldn't be left out in the cold just because he converts to 3rd edition. We don't want the story aspects of that guy's campaign wrecked any more than we want to hurt the mechanical aspects of it with new rules. (herein lies the true ring, the ring - RPG to bind together all other RPGs between one binder)
From November:  rather than just choose a spot on the spectrum, then, which will please some but not all, what if we left it up to each individual group? What if D&D gave you the tools and you chose whether or not to use them?This would mean that some, or perhaps even all, of the various subsystems that exist (and have existed for a long time) in character development would be optional. This would include all the skills and feats and various pieces that go into customizing a character. A radical approach, really. One that would greatly affect game play, but I want to just focus on character development and creation right now. If you strip these things away—from a character creation point of view—you're essentially left with ability scores, race, class, hit points, armor class/defenses, and gear. Interestingly, something that looks a lot like a 1st edition character or even an OD&D character. The other things could be layered on as desired. Again, as an interesting thought experiment, you could layer on a couple options (kits and proficiencies) and have something that looks a lot like a 2nd edition character. Layer on a couple different ones (skills and feats) and you've got a 3rd edition character. A different combination (skills, feats, and powers) gets you a 4th edition character, and so on. (this is the shit we are arguing about, ranting about and I see as 5e's albatross - here its let EACH GROUP decide which rules to play by, but now that 5e is announced it 's let EACH PLAYER decide which rules to play by.  The Group option was workable, the current marketing speak is a recipe for unmitigated disaster)
Alright, I got a small rant in ;)
I'll dig deeper into Monte's mind later.  Tomorrow I hope to have good fodder to pick through.  He could save me time and send it to me the day before it gets published.  I promise not to post my commented copy before Monte ;)
Posted by Tenkar at 10:21 PM