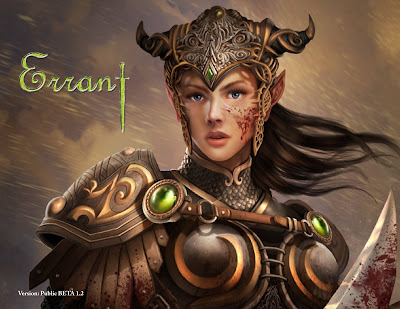 What is Errant? It's an Old School RPG wrapped in New School sensibilities. It's kinda like a half-breed, or a hybrid. In any case, it works.

It's the 6 stats you already know, determined by rolling 3d6 six times and arranging in as you see fit. There are attribute test you can make against your attributes - level is not taken into account, so forget what you might have learned in Castles & Crusades and the like.

Then there are class skills. When using a class skill, you get to add your level if it's a skill you know. Which does correct a situation with C&C's Siege Engine - all skill attempts get level as a bonus in that system if I recall correctly.

Schools of Magic are arranged by school and color coded , which makes reading the list a snap. The spell descriptions themselves are generally one paragraph and easy to reference. Here's the kicker tho - casting spells require the caster to expend hit points to cast. Nice twist, and it adds a bit of strategy to the caster classes. The spell casting system would have been a good fit for LotFP Weird Fantasy's default setting - requiring casters to give of their own health and energy to cast certainly adds to the suspense.

In many ways, it looks like an Old School RPG made with New School advances in presentation. Heck, it's even laid out for ease of reading on a tablet, like my iPad.

My one gripe, and it's a small one, is that the bookmarks could be broken down just a bit more. For example, under "Classes", we could have further bookmarks for each of the classes. As it is, we just have a general "Classes" bookmark.

Of course, most PDFs aren't even bookmarked at all these days and there really is no excuse for that.

Errant RPG is a retro-clone that captures the basic playstyle of the classic game while introducing a variety of modern innovations to improve play.

Key Innovations over the Classic Game:
- Race and Class as separate choices
- Inclusion of a wider range of classes like Bards and Paladins
- Removal of the Cleric class and replacement with a Scholar class
- Even distribution of spells across the schools so that school choice for specialization is balanced
- Expansion of Saving Throws to cover a wider range of instinctive reactions
- New Language mechanics that makes a distinction between vernacular and written languages
- A Luck Mechanic to help new character survive a dangerous world
- An Ambitions Mechanic to give your character goals
- Replacement of Alignment with a more flexible Karma system
- A new method of resolving damage/injury/death once you run out of hit points