How Do You Handle a Campaign That is Designed to Change Midstream (ex: Evernight) Tracks? 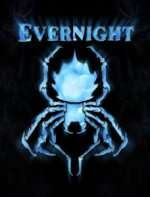 What I mean by the title of this post is this:  in a campaign like Evernight for Savage Worlds, the PCs go into the campaign expected a fairly typical Fantasy genre campaign... which quickly becomes fight for survival against an alien invasion from beyond.  Do you tell your players up front what the plot twist is going to be, or do you spring it on them in the hopes that they'll accept it?

In my looking at settings for Savage Worlds, I've been rereading bit and pieces of Evernight.  Great concept, horrible execution.  This is railroading at it's very best (worst).  Assumptions are built into the storyline that force the PCs to go a certain way or the GM finds them off script, off the reservation and himself scrambling to plug the holes.

Do you tell the players that the train is heading in a certain direction and they need to follow along?  Do you strip Evernight down to it's core concepts, and let the game go where it may?  The second option requires a strong and skilled GM.

This crap keeps me up at night.  I find it real frustrating that a cool concept like Evernight could be so poorly executed.