RPGNow is running a September Setting Sale with thousands of titles in the mix. That's a lot to sort through. I'm going to try to pick out some of my personal favorites that are OSR or system neutral over a small series of posts (although one or two may creep in from outside those parameters) Part 1 is here.  Part II is here. 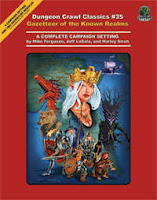 Dungeon Crawl Classics #35: Gazetteer of the Known Realms - I have the boxed set and it is a beast. You literally have a full campaign in this box and then some - note: written for 3x - "Certain adventures only come around once. Like when the grizzled old warrior decides to go after the dragon, and asks who’s coming with him. Or when the dark-eyed sorceress slowly surveys the crowd of peasants, waiting for one to step forward and pull the sword from the stone. This boxed sets contains those adventures. Dungeon Crawl Classics #35: Gazetteer of the Known Realms brings together the Dungeon Crawl Classics modules into one comprehensive world. This magnificent set includes: Gazetteer of the Known Realms, a 120-page book describing the archetypal fantasy world of Áereth. Three 24"x36" poster-sized full-color maps of Áereth ready to host your adventures. GM’s Guide to the Known Realms, a 136-page sourcebook describing deities, equipment, creatures, and NPCs, plus rules for starting campaigns with 0-level characters and adventure paths that you can build from existing DCC modules.  Halls of the Minotaur, a 32-page adventure module for 0-level characters perfectly suited to starting off your campaign in Áereth. The Thief Lord’s Vault, a 32-page adventure module for levels 4-6 that sends the heroes into the legendary treasure vault of Cazül the Chaotic." 29.99  20.99

Wormskin Issue 5 - Note: The entire series in on sale - "Wormskin explores the mythic forest called Dolmenwood, a weird folklore setting for use with B/X or similar tabletop adventure games. Each issue uncovers various elements of this eldritch realm situated on the leafy verges of Fairy, where austere Drunes rub elbows with weird elf-lords and talking beasts, where witches wander skyclad and armed with sinister magicks to bind the spirits of hapless adventurers. Be wary. " 3.99  2.67

Kobold Guide to Worldbuilding - "Roleplaying games and fantasy fiction are filled with rich and fascinating worlds: the Forgotten Realms, Glorantha, Narnia, R'lyeh, Middle-Earth, Barsoom, and so many more. It took startling leaps of imagination as well as careful thought and planning to create places like these: places that readers and players want to come back to again and again. Now, eleven of adventure gaming’s top designers come together to share their insights into building worlds that gamers will never forget. Learn the secrets of designing a pantheon, creating a setting that provokes conflict, determining which historical details are necessary, and so much more. Even take that creative leap—and create dazzling worlds of your own! Essays by Wolfgang Baur, Keith Baker, Monte Cook, David "Zeb" Cook, Jeff Grubb, Scott Hungerford, Chris Pramas, Jonathan Roberts, Michael A. Stackpole, Steve Winter, with an introduction by Ken Scholes."  14.99  10.04 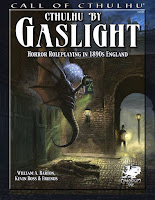 Cthulhu by Gaslight - Halloween is sneaking up on us. What better way to celebrate the holiday than some CoC? - "IN THE 1890s, Cthulhu and his minions share the globe with the mighty British Empire. But they owe allegiance to an empire of their own — a dark and cruel design on ownership of the world and on the dreams of humanity. Even among the green fields of rural England, only thoughtful and energetic intervention keeps the shadows at bay. CTHULHU BY GASLIGHT offers a thoroughly developed Victorian England setting for use with Call of Cthulhu. Character creation has been enhanced with new wrinkles. There are articles on the Victorian world, crime, politics, personalities, and so forth. There are extensive sections on the Cthulhu Mythos in Britain — creatures, cults, and books — and a précis of Ramsey Campbell’s Severn River Valley. Also included are tips on running various types of Gaslight-era campaigns, a gazetteer of intriguing British myths and legends, a selection of friends and foes from Victorian fiction, and a lengthy bibliography /filmography of suggested reading and viewing. Rounding out this edition are a pair of Victorian-era scenarios — one an urban adventure set in London, the other set in rural Dartmoor. Includes a two-color, fold-out map of the City of London."  15.92  10.67 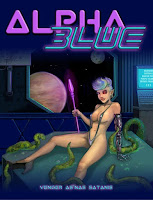 Alpha Blue - "Warning: Alpha Blue contains potentially offensive material in regards to sexual content, adult situations, vulgar language, mature themes, etc. This book is not only a rules light sci-fi RPG (d6 dice pools similar to both Crimson Dragon Slayer and The Outer Presence), but a campaign setting full of tables and scenario seeds.  And what is that setting?  Well, Alpha Blue is one of the most notorious space station brothels in the universe.  I know I'm biased, being the creator and all, but I really love this game!  I've run it many times during the playtest phase, for my home group after its release, at conventions, virtually on Roll20.  It's literally the most fun to GM of all the hundreds of RPGs I own.  Here's a little secret to running Alpha Blue - just borrow bits and pieces from vintage scifi movies and TV shows, add in a bit of sleaze, and sprinkle some funny stuff on top.  Voila! And what makes this different than similar offerings?  Three things!  The first is humor. I've made this a fun read with hilarious, gonzo shenanigans around every corner.  The second is sex appeal.  Plenty of folks won't buy this book.  Hell, they won't even read a free PDF if it was shoved in their face.  Why?  Because some of it is raunchy, disgusting, perverted, and just plain gross.  Your welcome, skeezoids!  Third, I love old school sci-fi.  So much, in fact, that the future is seen through a 1970s and 80s perspective.  Don't forget tables, tables, and more tables!  Mutations, alien quirks, funky fashion, just the right retro color palette, what's inside that asteroid, what are the scanners picking up, did you assassinate your victim, how does your therapy-bot help you cope with life among the stars, is the space station's central computer in a favorable mood, sexual fetish, weird space cocktails, etc.  A third of this book is fricken random tables!" $10.00  $6.70

Purchases made via The Tavern's affiliate links help to support The Tavern. Additionally, if we generate $300 or more via OBS affiliate referral monies, I've promised to release a short adventure for free on The Tavern. Just under 65 bucks to go :)
Posted by Tenkar at 3:46 PM