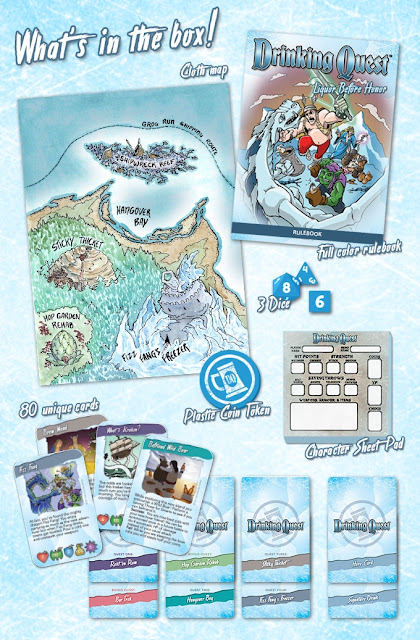 Let me say this right from the start. I've backed every previous project in the Drinking Quest line and have been extremely pleased with the results of each. Does that mean I'm going to blindly back Drinking Quest: Liquor Before Honor? Pretty much ;)

I'll try to remember to bring a deck or two with Gamehole Con and maybe we can do a pick up game or two - but you'll need to supply the booze ;P

Hell, but in is only 26 bucks US for the buy in - bring your own and maybe I'll buy the booze! (I'll charge it toBill though ;)


Are you the type of Dungeons & Dragons player that just wants to sleep with everything?

Hi, I'm game designer Jason Anarchy. I make the Drinking Quest series and this is my new game!

Chuglox, Daiquirin, Bartlebut and Annoying Sidekick ARE BACK! And this time they are REALLY OUT OF SHAPE FROM ALL THE DRINKING! Except for Annoying Sidekick who is now in great shape because he's really annoying.

Drinking Quest is a really simple, quick-start RPG but when your hero dies... you chug your drink in real life to continue!

The last Kickstarter (For Journey into Draught) Added two extra quests, a coin token, a cloth map and other extras... and we're starting with that standard this time without even having to unlock them as stretch goals!