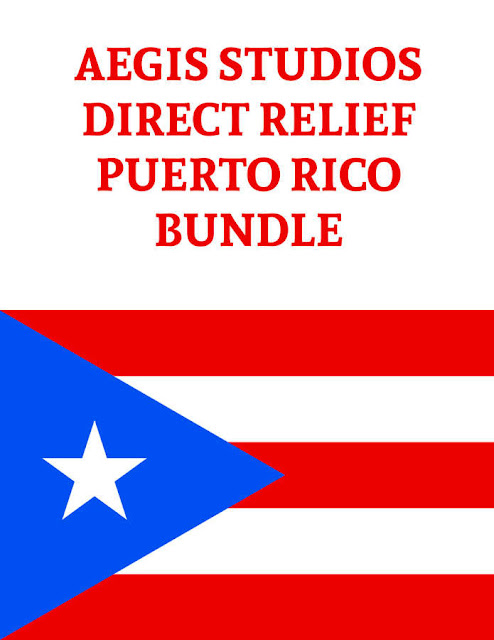 This has been one hell of a Hurricane Season. The latest heavy hit was Puerto Rico. Much of Puerto Rico is still without power and may be for weeks or even months.

Aegis Studios is offering the Puerto Rico Direct Relief Bundle. All proceeds made by Aegis Studios from the sale of this bundle.


At the recommendation of artist Denis McCarthy, we have compiled a superbundle of stock art, publisher resources and additional materials, the proceeds from which will go to benefit Puerto Rico through the Direct Relief charity. Link to Puerto Rico Direct Relief Bundle

ALL PROCEEDS FROM THE BUNDLE (Aegis Studios gets 70% of what we sell at DriveThruRPG) will go directly to Direct Relief.

I've already purchased the bundle and have plans for the excellent stock art included. This will be tomorrow's Midweek Monster Madness post and a major player in next month's Tavern Adventure.

Yep, that's an affiliate link above. Monies raised from now to the end of the month will help pay The Tavern's art expenses. We've just commissioned Denis McCarthy to do a major scene for next month's adventure ;)