RPGNow is running a September Setting Sale with thousands of titles in the mix. That's a lot to sort through. I'm going to try to pick out some of my personal favorites that are OSR or system neutral over a small series of posts (although one or two may creep in from outside those parameters) Part 1 is here.  Part II is here. Part III is here. Part IV is here. Part V is here. 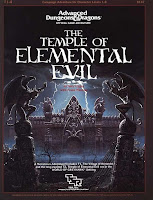 Temple of Elemental Evil - my original print copy of T1 - T4 saw more use in my high school and college days than any book other than the core three. I must have run this a half dozen times - at least. By far, my favorite old school adventure - A sinister force, long thought destroyed, stirs from the black hole that spawned it. Like an ebony darkness it prowls the land and safety is but an illusion, for it watches from every shadow and ponders possibilities. - What began years ago, with the introduction of the players to the quiet village of Hommlet and the amazing lands of Greyhawk, at last is complete. Here is the long-awaited campaign adventure, featuring the ruins of the Temple of Elemental Evil, where a great evil broods and grows beneath its blasted stones. This is your chance to drive it back and scatter its force again. - This product includes the village of Hommlet, the filthy shire of Nulb, and reveals the ruins of the Temple of Elemental Evil and the labyrinths that lie beneath, a warren of darkness. And beyond these ruins, even more is revealed. - For the first time, this product provides a complete campaign adventure, which will take beginning characters from 1st all the way to 8th level and possibly beyond! Hours of adventuring await you! 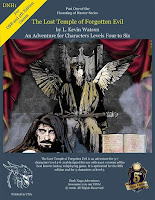 The Lost Temple of Forgotten Evil (5e & OSR) - "A Fifth Edition Fantasy or OSR adventure for 4-6 players of level 4-6 - The small town of Boldon, and its surrounding villages are afraid. Dozens of people are missing, some speculate lost to some nefarious purpose. A broken drunkard tells fantastic tales of an evil temple and the horrible things within. The rare few who know the legends and history of the region are beginning to think the dark times have returned; not seen since the fall of the first age of man. People are beginning to feel the icy fingers of fear closing in. The party becomes aware of these events and is inspired to investigate. This leads them to a broken man who tells them a story of a lost temple. Has it been rediscovered by men seduced by its forgotten evil? The drunkard’s tale leads to others who might help the party discover more before they face The Lost Temple of Forgotten Evil." 6.95  4.66 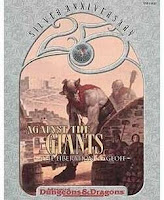 Against the Giants: The Liberation of Geoff - The classic G1 -G3 series. Didn't much care for the D series that followed, but the G series was a blast - "A ravaged land. . . . Villains that really are larger than life. . . . A time for heroes. . . . A decade ago, the land of Geoff was overrun by a horde of giants, ogres, and evil humanoids, its people either slain, enslaved, or driven into exile. Now at last the tide has turned. Against the Giants features: The full text of three classic adventures by Gary Gygax: G1: Steading of the Hill Giant Chief G2: The Glacial Rift of the Frost Giant Jarl G3: Hall of the Fire Giant King - Details on 18 new encounter sites in the war-torn land of Geoff, linked together to form a grand campaign. - Dozens of hours of gameplay as the heroes struggle to free and entire country from the grasp of giant overlords. - An epic adventure for characters of all levels." 4.99  3.34 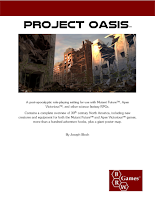 Project Oasis - somehow this one escaped me prior. I'll be rectifying that. "A thousand years ago, the world died. Now, out of the ashes of the great nuclear-biological Devastation comes a new world. A world where intelligent apes hunt humans for sport. Where subterranean mutant cyborgs serve great disembodied brains and plot world domination. Where apocalyptic cults try to finish what the bombs started. Where frightful artificial intelligences command armies of robot servants, and entire nations of clones lead peaceful and productive lives, unless you’re not of the right clone-lineage. Where mankind and his newfound fellow intelligent species try to pick up the pieces and rebuild civilization. This is also a world where a force for good, knowledge, and science works to help restore that which was lost, to guide this new world onto a path of justice and learning. That force is called Project Oasis. Project Oasis is a post-apocalyptic role-playing setting for use with Mutant Future™, Apes Victorious™, and other science fantasy RPGs. Contains a complete overview of 30th century North America, including new creatures and equipment for both the Mutant Future™ and Apes Victorious™ games, more than a hundred adventure hooks, plus a giant poster map." 9.95  6.67 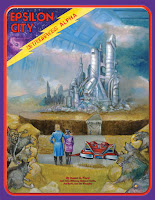 Metamorphosis Alpha: Epsilon City - "On a spaceship 50 miles long with more than a million colonists, Epsilon City was the single largest habitation. It was filled with entertainment centers, apartments, and offices for all the people moving about the ship during the long voyage. The city was designed to be maintained by its own artificial intelligence (A.I.) and a special series of robots able to maintain areas of the city when breakdowns happened. Epsilon City wasn’t even half full when the interstellar radiation cloud destroyed the people of the ship and turned 99% of them into piles of white ash. The city was wiped out. Now, three hundred years later, things are vastly different in the city. The A.I. is insane and has an aggressive personality. The special robots have had to change or be destroyed, and have mutated much like the rest of the life on the ship. Wolfoid packs now inhabit many sections of the city and consider this metropolis their lair. And many more dangers lurk, hidden and waiting to be explored… 2016 marks the 40th anniversary of Metamorphosis Alpha! In honor of this milestone, creator James M. Ward has authorized Goodman Games to publish Metamorphosis Alpha: Epsilon City. This huge expansion for the starship Warden is the biggest expansion for the original 1976 edition ever published! This product contains: The 272-page Epsilon City setting book, three 11”x17” maps, a 20-page cyborg supplement, and a 56-page adventure supplement." 25.00  16.75

Purchases made via The Tavern's affiliate links help to support The Tavern. Additionally, if we generate $300 or more via OBS affiliate referral monies, I've promised to release a short adventure in the month of October for free on The Tavern. Well, we just did! Woot!  I'll look to invest at least half of the extra monies into art or cartography for the adventure. I'd love to pony up for original pieces of art, but that will require significant monies in the pot ;)
Posted by Tenkar at 9:52 PM